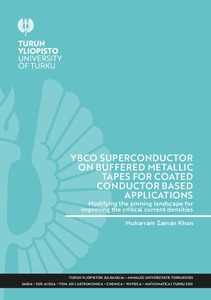 High temperature YBa2Cu3Oz6+xsuperconducting films are deposited on top of differently fashioned buffered metals to enhance the critical current density and its isotropy for coated conductor applications. The improvements are achieved by engineering the defect structure within the superconducting matrix. BaCeO3 and BaZrO3 were used as dopants to introduce the artificial pinning landscape in YBa2Cu3O6+xmatrix. It was realized that growth temperature, dopant concentration, and underlying buffer layers stack strongly affect the growth of YBa2Cu3O6+x. However, these factors are already widely studied, instead, it was observed that minor changes in one of these parameters result in degrading the structural growth and superconducting properties. A new parameter is introduced in the pulsed laser deposition process,that is, reducing the target grain size from micrometer to nanometer. The effect of targets with varying grain size was tested on both single crystals and buffered metals. Far from the expectations, the natural and artificial pinning landscape was significantly enhanced as there appeared to be notable differences in the size, shape, density and distribution of created defects. Such improvements for defects led to enhanced vortex pinning phenomenon, resulting in high critical current densities and their isotropies. This approach, together with optimizing the fore mentioned parameters, can be utilized for the fabrication of microwave devices and coated conductor applications