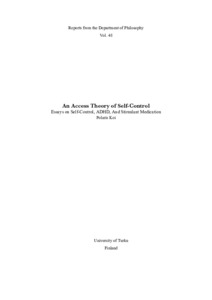 This dissertation consists of four articles and an introductory essay, the overarching aim of which is to investigate the nature of self-control and its implications.

For my account, self-control is defined by its behavioural function, not by its reliance on any specific cognitive or neural process. As a result, self-control can be realized by a large range of functionally equivalent processes. Some such processes are intrapsychic, such as inhibition, rehearsal of reasons, and construal. Others are situational, such as environmental selection and modification as well as social processes of self-control.

Not all self-control processes are equally available for all agents, however. Some processes that are heavily reliant on executive functioning, such as inhibition and rehearsal of reasons, are unavailable for agents with executive dysfunction. For other self-control processes, social and economic constraints delimit their availability. It then becomes of utmost importance that agents are aware of such means of self-control that are a good fit for the agent and her situation.