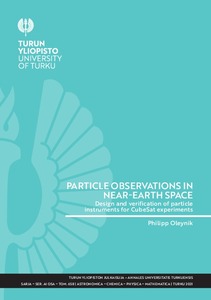 This doctoral thesis presents the design, simulation, and calibration of two instruments developed to study energetic charged particles in low-Earth orbit. The near-Earth energetic charged particle populations include particles trapped by the Earth magnetic field, solar energetic particles, and galactic cosmic rays. Each population has its spatial distribution, energy spectra, and temporal dynamics that reflect the physical processes connected with the particle injection, acceleration, or removal.

The instruments discussed in the thesis aim to study the most abundant and dynamic particle population, i.e., electrons and protons in the Van Allen radiation belts. In addition, with one of the instruments we endeavour to detect energetic neutral atoms originating in the solar corona. Solar energetic neutral atoms carry direct information on particle acceleration mechanisms occurring in the solar corona which are challenging to analyse using in-situ observations of charged particles.

The second instrument described in the doctoral thesis is PATE, a particle telescope that is a part of the payload of the Finnish CubeSat mission Foresail-1, scheduled to be delivered for launch in 2021. We have simulated the instrument under development and verified its design by using a precise simulation model. We present the instrument construction, particle classifier rules, and instrument response functions.

An essential part of the work presented in the thesis is Monte Carlo simulations within the Geant4 framework. We have used Geant4 modelling to study particle detector responses, to calibrate instrumental gains and offsets, and to verify the designs of particle classifiers. We conclude that this simulation framework offers an efficient way of assessing several aspects of charged particle instruments and that such simulations should be an integral part of the design and verification process of charged particle instruments flown in space.