B cell-mediated immunity and signal regulation. The roles of MIM/MTSS1 and IRF4

B cell-mediated immunity and signal regulation. The roles of MIM/MTSS1 and IRF4 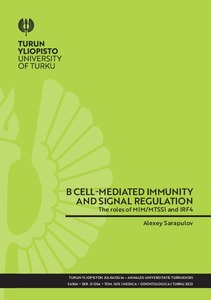 B cells constitute an important part of the adaptive immune system and produce antibodies, which protect organism against infectious agents. Recognition of the antigen by the B cell receptor and the following B cell activation are key steps toward production of protective antibodies. In recent years it has been shown that the actin cytoskeleton is actively involved in the regulation of early events of B cell activation. Therefore, understanding the factors that influence actin cytoskeleton remodeling in B cells is essential for the understanding of B cell-mediated immunity.

The focus of this work is on the membrane and actin cytoskeleton regulatory protein, MIM/MTSS1, and on the B cell-specific transcription factor, IRF4. In order to reveal unexplored MIM functions, the gene and protein sequences of MIM were analyzed by using computational tools, bioinformatic resources and online databases. The analysis demonstrates a high overall degree of MIM conservation in vertebrates and we also report on the presence of various short functional motifs. We also show that expression of MIM is downregulated in samples from patients with poor prognosis chronic lymphocytic leukemia (CLL). The role of MIM in B cells was studied by analysis of MIM knock-out (KO) mice. MIM-deficiency results in impaired BCR signaling upon stimulation with surface-bound but not soluble antigen, and elevated reprogramming toward higher oxidative metabolic state upon TLR4/9 stimulation. MIM KO animals also exhibit lower antibody responses against T cell-independent antigen immunization. Finally, the impact of IRF4-deficiency on BCR signaling was examined in an IRF4-KO DT40 cell line. We show that IRF4 deficiency results in disturbed BCR signaling, characterized by impaired Syk, BLNK, MAPK1/2 activation and F-actin engagement, low SHIP phosphatase levels and upregulation of PI3K, PLC��� and Ca2+ signaling.

This work is the first comprehensive study of the actin-regulatory protein MIM in B cell-mediated immunity and provides an evolutionary standpoint on the functional significance of MIM protein regions. This study also highlights the fact that IRF4 is not only a downstream effector of BCR signaling but by itself can influence B cell activation via developmental stage-specific expression in B cells.