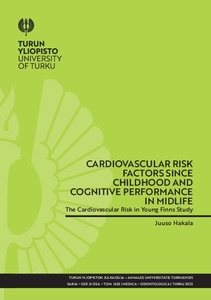 According to the World Health Organization, dementia and cognitive deficits are major global health and social care challenges in the 21st century. As the population ages, the need for preventive means against cognitive deficits becomes crucial. The risk of cognitive deficits is influenced by e.g., cardiovascular risk factors, which may begin to exert their influence decades before any detectable cognitive symptoms.

This thesis is a part of the prospective population-based Cardiovascular Risk in Young Finns Study that focuses on cardiovascular risk factors from childhood to adulthood with a follow-up time of over 30 years. The baseline study was conducted in 1980, with 3,596 randomly selected boys and girls aged between three and 18 participating in clinical examinations. The follow-up studies were conducted in three- to nine-year intervals. In the follow-up study conducted in 2011, the cognitive performance of 2,026 subjects aged between 34 and 49 was assessed using computerized cognitive testing.

If these associations turn out to be causal, the observations can be utilized for aiming to better cognitive health in adulthood by targeting preventive means against cardiovascular risk factors already in childhood and adolescence. Hence, those individuals with a worse cardiovascular risk factor profile since childhood might especially benefit from, for example, adopting healthier lifestyle.