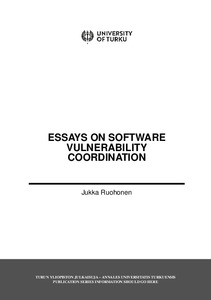 Software vulnerabilities are software bugs with security implications. Exposure to a security bug makes a software system behave in unexpected ways when the bug is exploited. As software vulnerabilities are thus a classical way to compromise a software system, these have long been coordinated in the global software industry in order to lessen the risks. This dissertation claims that the coordination occurs in a complex and open socio-technical system composed of decentralized software units and heterogeneous software agents, including not only software engineers but also other actors, from security specialists and software testers to attackers with malicious motives. Vulnerability disclosure is a classical example of the associated coordination; a security bug is made known to a software vendor by the discoverer of the bug, a third-party coordinator, or public media. The disclosure is then used to patch the bug. In addition to patching, the bug is typically archived to databases, cataloged and quantified for additional information, and communicated to users with a security advisory. Although commercial solutions have become increasingly important, the underlying coordination system is still governed by multiple stakeholders with vested interests. This governance has continued to result in different inefficiencies. Thus, this dissertation examines four themes: (i) disclosure of software vulnerabilities; (ii) coordination of these; (iii) evolution of these across time; and (iv) automation potential. The philosophical position is rooted in scientific realism and positivism, while regression analysis forms the kernel of the methodology. Based on these themes, the results indicate that (a) when vulnerability disclosure has worked, it has been relatively efficient; the obstacles have been social rather than technical in nature, originating from the diverging interests of the stakeholders who have different incentives. Furthermore, (b) the efficiency applies also to the coordination of different identifiers and classifications for the vulnerabilities disclosed. Longitudinally, (c) also the evolution of software vulnerabilities across time reflect distinct software and vulnerability life cycle models and the incentives underneath. Finally, (d) there is potential to improve the coordination efficiency through software automation.