Reality guides for life before death

Reality guides for life before death 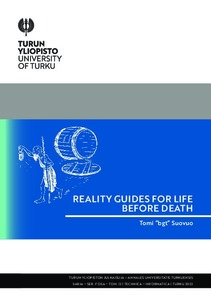 The rise of the digital game industry has brought along a plethora of game design tools and frameworks. They are likely to be named specifically as design frameworks for games because their creators have been positioned themselves on the field of game research due to their personal interest in games or due to the fast rising game business. There appears often not to be a reason why these tools and frameworks could not be used in any other kind of interaction design too.

Looking at Reality Guides through several game design frameworks, a new theoretical model was constructed: The GEM Game Experience Model is a result of Grounded Theory based work to find a single underlaying model behind all the existing ones.

Two non-game initiatives have been worked on with the guidance of Reality Guide thinking and GEM thinking: Life Before Death aims at producing services that will help people with premature end of life circumstances to make the best possible out of their remaining life. Reality Guides for the end-of-life. Also, in the initiative of creating a community around Digital Theology a project course was organized using gamer community originated Discord as a central Reality Guide for the course participated by students from four continents.