The Beginning of Visual Grammar Learning : Analysis on the Use of Graphical Content in 18th Century English Grammars

The Beginning of Visual Grammar Learning : Analysis on the Use of Graphical Content in 18th Century English Grammars 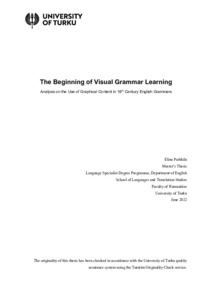 This thesis examines the usage of graphical content in 18th-century English grammars. This century saw the rise of more inclusive grammar-writing, which resulted into more experimental approaches in teaching the language. These included the usage of different forms of graphical content, such as tables, lists, and illustrations, which came to exist in their modern form from 1750’s onwards. Using different forms of graphics were the new and improved way to convey information to the masses, even in grammar-writing.

I gathered 34 grammars from the Eighteenth Century Grammars Online (ECEG) and Eighteenth Century Collections Online (ECCO) databases and chose 12 grammars based on their target audiences (i.e., women, children, and men) to include into my in-depth analysis. With this material, I answer the questions: How much graphical content is used within each target audience? What grammatical features are presented most often graphically? How is the graphical content used in the grammars? Are there situations where graphical content is the only tool to explain a grammatical feature?

Through close reading, I conclude that the grammars with the most graphical content were women’s grammars, and the least amount was in children’s grammars. The grammatical features shown graphically the most were pronouns, verbs, and nouns alongside etymology and orthography. The graphical content was often referred to within the ongoing text by including them to the text grammatically, similarly to present day writing. Personal pronouns were always presented with graphical content, but textual information was never completely replaced by graphics. The target audience and the gender of the grammarians were a huge influence on the contents of the grammars and the utilisation of graphical content, making each grammar group slightly different from each other.