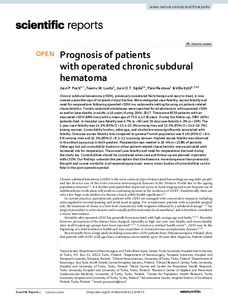 Chronic subdural hematoma (cSDH), previously considered fairly benign and easy to treat, is now viewed a possible sign of incipient clinical decline. We investigated case-fatality, excess fatality and need for reoperations following operated cSDH in a nationwide setting focusing on patient-related characteristics. Finnish nationwide databases were searched for all admissions with operated cSDH as well as later deaths in adults (>= 16 years) during 2004-2017. There were 8539 patients with an evacuated cSDH (68% men) with a mean age of 73.0 (+/- 12.8) years. During the follow-up, 3805 (45%) patients died. In-hospital case-fatality was 0.7% (n = 60) and 30-day case-fatality 4.2% (n = 358). The 1-year case-fatality was 14.3% (95% CI = 13.4-15.2%) among men and 15.3% (95% CI = 14.0-16.7%) among women. Comorbidity burden, older age, and alcoholism were significantly associated with fatality. One-year excess fatality rate compared to general Finnish population was 9.1% (95% CI = 8.4-9.9) among men and 10.3% (95% CI = 9.1-11.4) among women. Highest excess fatality was observed in the oldest age group in both genders. Reoperation was needed in 19.4% (n = 1588) of patients. Older age but not comorbidity burden or other patient-related characteristics were associated with increased risk for reoperation. The overall case-fatality and need for reoperations declined during the study era. Comorbidities should be considered when care and follow-up are planned in patients with cSDH. Our findings underpin the perception that the disease is more dangerous than previously thought and causes mortality in all exposed age groups: even a minor burden of comorbidities can be fatal in the post-operative period.