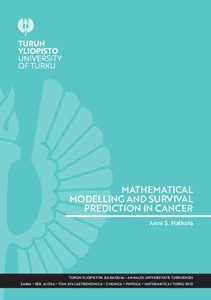 Cancer is one of the leading causes of death, thus opening a vast need for extensive research and insights. The survival prospects, along with treatment benefits and costs (economical or health-related), can be predicted with tools from mathematical modelling and regression analysis. Promising results have been gained on suggesting mono- and combination therapies, that could potentially improve the treatment strategies. Furthermore, multiple biological features have been recognized as important predictors of treatment outcome. However, since cancer remains a challenging and unpredictable enemy, the need for more effective and personalized predictions and treatment suggestions remains.

In this dissertation, various modelling approaches were used to predict cancer behavior, treatment outcomes and patient survival. An ordinary differential equation model was developed to investigate the changes in the cancer cell density as different treatment regimen were applied. In addition, we included the immune system along with immunotherapy, since the immune response is an important part of cancer development and has a potential to eradicate tumors. It was noted, that an adaptive treatment resulted in lower cancer burden and less time in treatment. In addition, combination treatments (immunotherapy with either chemo- or targeted therapy) generally resulted in smaller cancer burden than monotherapies, however, the potential additional side effects of two therapies have to be considered.

Two new regression methods were developed with focus on survival prediction. A greedy budget-constrained Cox regression (Greedy Cox) utilizes L2-penalty and considers the cost of selected parameters. It was also compared to LASSO selection (L1). Optimal Subset CArdinality Regression (OSCAR) method was developed with L0-pseudonorm penalty to provide sparse models. The costs of measuring the selected model features were also considered in comparison to prediction accuracy. The methods were validated on clinical prostate cancer data and it was noted that a comparable level of prediction accuracy was already reached with a few parameters, resulting in relatively low costs. All of the investigated methods also selected reasonable, cancer-related parameters such as prostate specific antigen (PSA).

Taken together, this dissertation provides a comprehensive research of novel tools for modelling and predicting cancer behavior and patient survival. Important hallmarks of cancer development, such as immune response and angiogenic switch have been included along with corresponding treatments that have potential to change the traditional treatment regimens.