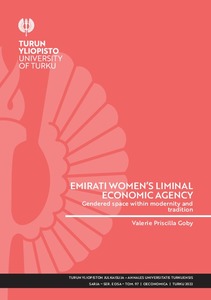 This dissertation explores Emirati women's liminal economic agency in the rapidly modernising Arabian Gulf country, the United Arab Emirates. This study represents a complex research area in which elements of modernisation such as women's increasing educational and professional qualifications are materialising against a cultural landscape traditionally characterised by domestic women, their financial dependence on men, and gender segregation. I employ a variety of methodologies to investigate the new spaces that are being moulded by the contradictory forces of modernisation and traditional values associated with women.

The theoretical framework of my research is based on three intersecting analytical lenses, namely, space, the Islamic conceptualisation of gender, and localised Islam. The conceptual frame of space is important as the backdrop of state policy and traditional gender norms is creating fluctuating, liminal spaces which influence the development of new agencies for Emirati women. The Islamic conceptualisation of gender is of vital importance as it is influential in determining the nature and degree of agency that women can validly assume. The conceptual lens of localised Islam permits the researcher to trace how Islam is reinterpreted both individually and collectively within phases of substantial socio-economic and national change as is the case in the United Arab Emirates.

This compilation thesis comprises a synthesis and four individual studies. The first study maps the area of my research which is the evolving space of women's economic agency, a space interactively contoured by empowering gendered state policy and restrictive gendered cultural traditions. These two potencies mutually influence the potential for positions of change for women. The second study explores how Emirati women are enacting leadership both in terms of self-reported behaviours and employee perceptions. Given the traditional cultural subordination of Emirati women, it was considered valuable to investigate how they assume positions of organisational power. The results of this study reveal highly contextualised enactments of leadership through the merger of state policy encouraging the rise of women to leadership roles and patriarchal subordinations of women. The third study investigates women employees in the public sector and finds that women have considerable sense of agency generated by their state-endorsed belief that they are contributing to national development. Its findings also reveal that young women regard the workplace as an important extra familial social setting in which they can independently forge personal relationships. The fourth study employs the conceptual lens of localised Islam to explore women's discursive legitimation of their economic agency in terms of Islamic dogma and their attribution of objections to this agency as deriving solely from cultural traditions.

Research in the geopolitical setting of my study, an affluent nation with an Islamic heritage aiming to establish itself as a global political player, provides a valuable addition to research on the mutual constitution of gender, culture, and nation in the global south. The contribution of this research is that its findings add to the reframing of transnational gender studies as it illustrates that freedoms and agencies may exist in very different forms from Western interpretations of these constructs. My identification of a case in which elements of patriarchal subordination fuel greater agency among women leaders demonstrates a highly contextualised relational operation of subordination and agency thus negating the binary of power versus subordination. My four studies illustrate a fluid interpretation of development of state, culture, and gender, and thus problematise the assumption of a dualism of modernity versus tradition.