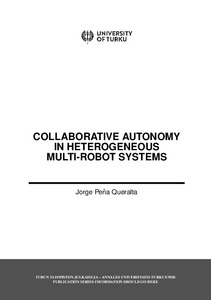 As autonomous mobile robots become increasingly connected and widely deployed in different domains, managing multiple robots and their interaction is key to the future of ubiquitous autonomous systems. Indeed, robots are not individual entities anymore. Instead, many robots today are deployed as part of larger fleets or in teams. The benefits of multirobot collaboration, specially in heterogeneous groups, are multiple. Significantly higher degrees of situational awareness and understanding of their environment can be achieved when robots with different operational capabilities are deployed together. Examples of this include the Perseverance rover and the Ingenuity helicopter that NASA has deployed in Mars, or the highly heterogeneous robot teams that explored caves and other complex environments during the last DARPA Sub-T competition.

This thesis delves into the wide topic of collaborative autonomy in multi-robot systems, encompassing some of the key elements required for achieving robust collaboration: solving collaborative decision-making problems; securing their operation, management and interaction; providing means for autonomous coordination in space and accurate global or relative state estimation; and achieving collaborative situational awareness through distributed perception and cooperative planning. The thesis covers novel formation control algorithms, and new ways to achieve accurate absolute or relative localization within multi-robot systems. It also explores the potential of distributed ledger technologies as an underlying framework to achieve collaborative decision-making in distributed robotic systems.

Throughout the thesis, I introduce novel approaches to utilizing cryptographic elements and blockchain technology for securing the operation of autonomous robots, showing that sensor data and mission instructions can be validated in an end-to-end manner. I then shift the focus to localization and coordination, studying ultra-wideband (UWB) radios and their potential. I show how UWB-based ranging and localization can enable aerial robots to operate in GNSS-denied environments, with a study of the constraints and limitations. I also study the potential of UWB-based relative localization between aerial and ground robots for more accurate positioning in areas where GNSS signals degrade. In terms of coordination, I introduce two new algorithms for formation control that require zero to minimal communication, if enough degree of awareness of neighbor robots is available. These algorithms are validated in simulation and real-world experiments. The thesis concludes with the integration of a new approach to cooperative path planning algorithms and UWB-based relative localization for dense scene reconstruction using lidar and vision sensors in ground and aerial robots.