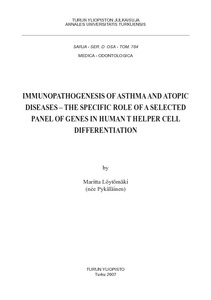 T helper cell (Th) functions are crucial for proper immune defence against various intra- and extracellular pathogens. According to the specific immune responses, Th cells can be classified into subtypes, Th1 and Th2 cells being the most frequently characterized classes. Th1 and Th2 cells interact with other immune cells by regulating their functions with specific cytokine production. IFN, IL-2 and TNF- are the cytokines predominantly produced by Th1 cells whereas Th2 cells produce Th2-type cytokines, such as IL-4, IL-5 and IL-13. Upon TCR activation and in the presence of polarizing cytokines, Th cells differentiate into effector subtypes from a common precursor cell. IFN and IL-12 are the predominant Th1 polarizing cytokines whereas IL-4 directs Th2 polarization. The cytokines mediate their effects through specific receptor signalling.

The differentiation process is complex, involving various signalling molecules and routes, as well as functions of the specific transcription factors. The functions of the Th1/Th2 cells are tightly regulated; however, knowledge on human Th cell differentiation is, as yet, fairly poor. The susceptibility for many immune-mediated disorders often originates from disturbed Th cell responses. Thus, research is needed for defining the molecular mechanisms involved in the differentiation and balanced functions of the Th cells. Importantly, the new information obtained will be crucial for a better understanding of the pathogenesis of immune-mediated disorders, such as asthma or autoimmune diseases.

In the first subproject of this thesis, the role of genetic polymorphisms in the human STAT6, GATA3 and STAT4 genes were investigated for asthma or atopy susceptibility in Finnish asthma families by association analysis. These genes code for key transcription factors regulating Th cell differentiation. The study resulted in the identification of a GATA3 haplotype that associated with asthma and related traits (high serum IgE level). In the second subproject, an optimized method for human primary T cell transfection and enrichment was established. The method can be utilized for functional studies for the selected genes of interest. The method was also utilized in the third subproject, which aimed at the identification of novel genes involved in early human Th cell polarization (0-48h) using genome-wide oligonucleotide arrays. As a result, numerous genes and ESTs with known or unknown functions were identified in the study. Using an shRNA knockdown approach, a panel of novel IL-4/STAT6 regulated genes were identified in the functional studies of the genes. Moreover, one of the genes, NDFIP2, with a previously uncharacterized role in the human Th differentiation, was observed to promote IFN production of the differentiated Th1 cells.

Taken together, the results obtained have revealed potential new relevant candidate genes serving as a basis for further studies characterizing the detailed networks involved in the human Th cell differentiation as well as in the genetic susceptibility of Th-mediated immune disorders.