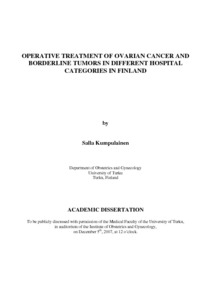 Surgery is the cornerstone of ovarian cancer treatment and maximal cytoreduction is important. In the early 1980’s primary surgical treatment of ovarian cancer was performed in over 80 hospitals in Finland. The significance of the operative volume of the hospital, of the training of the surgeons and of centralization of surgical treatment has been widely discussed. The aim of the present study was to evaluate the outcome of surgical treatment of ovarian cancer in different hospital categories retrospectively and prospectively, and to analyze if any differences are reflected in survival. The retrospective study included 3851 ovarian cancer patients operated between 1983 and 1994 in Finland. The data was analyzed according to hospital category (university, central, and other) and by quartiles of the hospital operative volume. The results showed that patients operated in the highest operative volume hospitals had the best relative survival. When stratifying the analysis by the period of diagnosis (1983-1988 and 1989-1994), the university hospitals improved their
performance the most.

The prospective part of the thesis was initiated in 1999 and included 307 patients with invasive ovarian cancer and 65 patients with an ovarian borderline tumor. The baseline and 5-year surveys used a questionnaire that was filled in by the operating surgeons. For analysis of the 5-year followup data, the hospitals were divided into three categories (<10, 10-20, or >20 patients operated in 1999). The effect of the surgical volume was analyzed also as a continuous variable (1-47 operations per year).

In university hospitals, pelvic lymphadenectomy was performed in 88 %, and para-aortic lymphadenectomy in 73 %, of the patients with stage I disease. The corresponding figures ranged from 11 % to 21 % in the other hospitals. For stage III ovarian cancer patients operated by gynecological oncologists, the estimated odds ratio for no macroscopic residual tumor was 3.0 times higher (95 % CI 1.2-7.5) than for those operated by general gynecologists. In the university and other hospitals 82% of the patients received platinum-based chemotherapy. Platinum + taxane combination was given to 63 % of the patients in the university and in 49 % in the other hospitals (p = 0.0763). Only a minority of the patients with tumors of borderline malignancy were staged according to recommendations, most often multiple peritoneal biopsies and omentectomy were neglected.