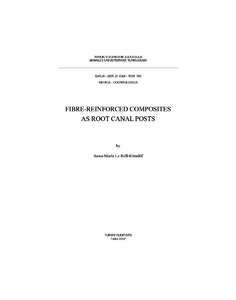 These studies suggest that it is possible to use individually formed FRC material with semi-IPN polymer matrix as root canal post material. They also indicate that there are benefits especially regarding the bonding properties to composite resin and dentin with this material compared to prefabricated FRC post material with a cross-linked matrix. Furthermore, clinically more repairable failures were found with this material compared to those of prefabricated posts.