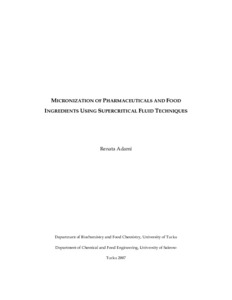 Micronization techniques based on supercritical fluids (SCFs) are promising for the production of particles with controlled size and distribution. The interest of the pharmaceutical field in the development of SCF techniques is increasing due to the need for clean processes, reduced consumption of energy, and to their several possible applications. The food field is still far from the application of SCF micronization techniques, but there is increasing interest mainly for the processing of products with high added value.

The aim of this study is to use SCF micronization techniques for the production of particles of pharmaceuticals and food ingredients with controlled particle size and morphology, and to look at their production on semi-industrial scale. The results obtained are also used to understand the processes from the perspective of broader application within the pharmaceutical and food industries. Certain pharmaceuticals, a biopolymer and a food ingredient have been tested using supercritical antisolvent micronization (SAS) or supercritical assisted atomization (SAA) techniques.

The reproducibility of the SAS technique has been studied using physically different apparatuses and on both laboratory and semi-industrial scale. Moreover, a comparison between semi-continuous and batch mode has been performed. The behaviour of the system during the SAS process has been observed using a windowed precipitation vessel. The micronized powders have been characterized by particle size and distribution, morphology and crystallinity. Several analyses have been performed to verify if the SCF process modified the structure of the compound or caused degradation or contamination of the product. The different powder morphologies obtained have been linked to the position of the process operating point with respect to the vapour-liquid equilibrium (VLE) of the systems studied, that is, mainly to the position of the mixture critical point (MCP) of the mixture.

Spherical micro, submicro- and nanoparticles, expanded microparticles (balloons) and crystals were obtained by SAS. The obtained particles were amorphous or with different degrees of crystallinity and, in some cases, had different pseudo-polymorphic or polymorphic forms. A compound that could not be processed using SAS was micronized by SAA, and amorphous particles were obtained, stable in vials at room temperature. The SCF micronization techniques studied proved to be effective and versatile for the production of particles for several uses. Furthermore, the findings of this study and the acquired knowledge of the proposed processes can allow a more conscious application of SCF techniques to obtain products with the desired characteristics and enable the use of their principles for broader applications.