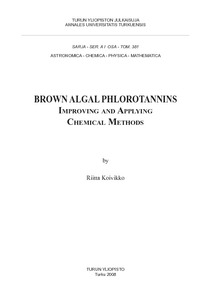 Along with these methodological studies, attention was focused on the factors in the procedure which generated variation in the yield of phlorotannins. The objective was to enhance the efficiency of the sample preparation procedure. To resolve the problem of rapid oxidation of phlorotannins in HPLC analyses, ascorbic acid was added to the extractant. The widely used colourimetric method was found to produce a variation in the yield that was dependent upon the pH and concentration of the sample.

To study whether the among-population variations in phlorotannin contents arise from the genetic divergence or from the plastic response of algae, or both, algae from separate populations were reared in a common garden. Genetic variation among local populations was found in both the phlorotannin profile and the content of total phlorotannins. Phlorotannins were also genetically variable within populations. This suggests that local algal populations have diverged in their contents of phlorotannins, and that they may respond to natural selection and evolve both quantitatively and qualitatively.