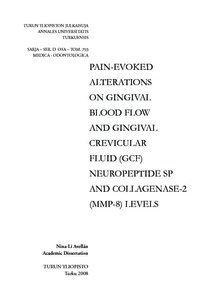 Previous studies have demonstrated that clinical pulpal pain can induce the expression of pro-inflammatory neuropeptides in the adjacent gingival crevice fluid (GCF). Vasoactive agents such as substance P (SP) are known to contribute to the inflammatory type of pain and are associated with increased blood flow. More recent animal studies have shown that application of capsaicin on alveolar mucosa provokes pain and neurogenic vasodilatation in the adjacent gingiva. Pain-associated inflammatory reactions may initiate expression of several pro- and anti-inflammatory mediators. Collagenase-2 (MMP-8) has been considered to be the major destructive protease, especially in the periodontitis-affected gingival crevice fluid (GCF). MMP-8 originates mostly from neutrophil leukocytes, the first line of defence cells that exist abundantly in GCF, especially in inflammation. With this background, we wished to clarify the spatial extensions and differences between tooth-pain stimulation and capsaicin-induced neurogenic vasodilatation in human gingiva. Experiments were carried out to study whether tooth stimulation and capsaicin stimulation of alveolar mucosa would induce changes in GCF MMP-8 levels and whether tooth stimulation would release neuropeptide SP in GCF. The experiments were carried out on healthy human volunteers. During the experiments, moderate and high intensity painful tooth stimulation was performed by a constant current tooth stimulator. Moderate tooth stimulation activates A-delta fibres, while high stimulation also activates C-fibres. Painful stimulation of the gingiva was achieved by topical application of capsaicin-moistened filter paper on the mucosal surface. Capsaicin is known to activate selectively nociceptive C-fibres of stimulated tissue. Pain-evoked vasoactive changes in gingivomucosal tissues were mapped by laser Doppler imaging (LDI), which is a sophisticated and non-invasive method for studying e.g. spatial and temporal characteristics of pain- and inflammation-evoked blood flow changes in gingivomucosal tissues. Pain-evoked release of MMP-8 in GCF samples was studied by immunofluorometric assay (IFMA) and Western immunoblotting. The SP levels in GCF were analysed by Enzyme immunoassay (EIA). During the experiments, subjective stimulus-evoked pain responses were determined by a visual analogue pain scale. Unilateral stimulation of alveolar mucosa and attached gingiva by capsaicin evoked a distinct neurogenic vasodilatation in the ipsilateral gingiva, which attenuated rapidly at the midline. Capsaicin stimulation of alveolar mucosa provoked clear inflammatory reactions. In contrast to capsaicin stimuli, tooth stimulation produced symmetrical vasodilatations bilaterally in the gingiva. The ipsilateral responses were significantly smaller during tooth stimulation than during capsaicin stimuli. The current finding – that tooth stimulation evokes bilateral vasodilatation while capsaicin stimulation of the gingiva mainly produces unilateral vasodilatation – emphasises the usefulness of LDI in clarifying spatial features of neurogenic vasoactive changes in the intra-oral tissues. Capsaicin stimulation of the alveolar mucosa induced significant elevations in MMP-8 levels and activation in GCF of the adjacent teeth. During the experiments, no marked changes occurred in MMP-8 levels in the GCF of distantly located teeth. Painful stimulation of the upper incisor provoked elevations in GCF MMP-8 and SP levels of the stimulated tooth. The GCF MMP-8 and SP levels of the non-stimulated teeth were not changed. These results suggest that capsaicin-induced inflammatory reactions in gingivomucosal tissues do not cross the midline in the anterior maxilla. The enhanced reaction found during stimulation of alveolar mucosa indicates that alveolar mucosa is more sensitive to chemical irritants than the attached gingiva. Analysis of these data suggests that capsaicin-evoked neurogenic inflammation in the gingiva can trigger the expression and activation of MMP-8 in GCF of the adjacent teeth. In this study, it is concluded that experimental tooth pain at C-fibre intensity can induce local elevations in MMP-8 and SP levels in GCF. Depending on the role of MMP-8 in inflammation, in addition to surrogated tissue destruction, the elevated MMP-8 in GCF may also reflect accelerated local defensive and anti-inflammatory reactions.