Animals in an Urban Context. A Zooarchaeological study of the Medieval and Post-Medieval town of Turku

Animals in an Urban Context. A Zooarchaeological study of the Medieval and Post-Medieval town of Turku 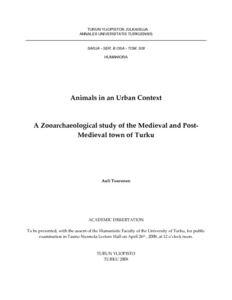 The aim of this study is to explore the role and importance of different animal species in Turku through an analysis of osteological data and documentary evidence. The osteological material used in this study is derived from two town plots in Turku dating from the 13th century to the 19th century. The osteological material deposited in Turku represents animals bred both in the town and in the surrounding landscape. Animal husbandry in SW-Finland can also be examined through a number of historical documents. The importance of animals in Turku and its hinterland are closely connected and therefore the roles of the animals in both urban and rural settings are examined.

The study has revealed the complexity of the depositional patterns in medieval and post-medieval Turku. In the different areas of Turku, characteristic patterns in the osteological material and different deposit types were evident. These patterns are reflections of the activities and therefore of the lifestyles practiced in Turku. The results emphasise the importance of context- awareness in the study of material culture from archaeological sites.

Both the zooarchaeological and historical sources indicate that cattle were important in animal husbandry in Turku from the Middle Ages up to the 19th century. Sheep were the second most common species. When taking into consideration the larger size of cattle, the dominance of these animals when it come to meat consumption seems clear even in those phases where sheep bones are more abundant. Pig is less abundant in the material than either cattle or sheep and their importance for subsistence was probably fairly modest, albeit constant. Goats were not abundant in the material. Most of the identified goat bones came from low utility body parts (e.g. skulls and lower extremities), but some amount of goat meat was also consumed. Wild species were of minor importance when it came to consumption practices in Turku.

The changes in Turku’s animal husbandry patterns between the medieval and post medieval periods is reflected in the change in age of the animals slaughtered, which was part of a wider pattern seen in North- and Central Europe. More mature animals are also present in the assemblages. This pattern is related to the more pronounced importance of cattle as a manure producer and a draught animal as a result of the intensification of crop cultivation. This change seems to occur later in Finland than in the more Southerly regions, and indeed it did not necessarily take hold in all parts of the country.