Imaging techniques applied for detection of secretion, transgene delivery and G proteincoupled receptors in reproductive and endocrine cells in vivo and in vitro

Imaging techniques applied for detection of secretion, transgene delivery and G proteincoupled receptors in reproductive and endocrine cells in vivo and in vitro 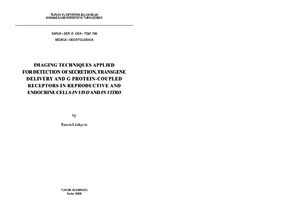 Post-testicular sperm maturation occurs in the epididymis. The ion concentration and proteins secreted into the epididymal lumen, together with testicular factors, are believed to be responsible for the maturation of spermatozoa. Disruption of the maturation of spermatozoa in the epididymis provides a promising strategy for generating a male contraceptive. However, little is known about the proteins involved. For drug development, it is also essential to have tools to study the function of these proteins in vitro.

One approach for screening novel targets is to study the secretory products of the epididymis or the G protein-coupled receptors (GPCRs) that are involved in the maturation process of the spermatozoa. The modified Ca2+ imaging technique to monitor release from PC12 pheochromocytoma cells can also be applied to monitor secretory products involved in the maturational processes of spermatozoa. PC12 pheochromocytoma cells were chosen for evaluation of this technique as they release catecholamines from their cell body, thus behaving like endocrine secretory cells. The results of the study demonstrate that depolarisation of nerve growth factor -differentiated PC12 cells releases factors which activate nearby randomly distributed HEL erythroleukemia cells. Thus, during the release process, the ligands reach concentrations high enough to activate receptors even in cells some distance from the release site. This suggests that communication between randomly dispersed cells is possible even if the actual quantities of transmitter released are extremely small.

The development of a novel method to analyse GPCR-dependent Ca2+ signalling in living slices of mouse caput epididymis is an additional tool for screening for drug targets. By this technique it was possible to analyse functional GPCRs in the epithelial cells of the ductus epididymis. The results revealed that, both P2X- and P2Y-type purinergic receptors are responsible for the rapid and transient Ca2+ signal detected in the epithelial cells of caput epididymides. Immunohistochemical and reverse transcriptase-polymerase chain reaction (RTPCR) analyses showed the expression of at least P2X1, P2X2, P2X4 and P2X7, and P2Y1 and P2Y2 receptors in the epididymis.

Searching for epididymis-specific promoters for transgene delivery into the epididymis is of key importance for the development of specific models for drug development. We used EGFP as the reporter gene to identify proper promoters to deliver transgenes into the epithelial cells of the mouse epididymis in vivo. Our results revealed that the 5.0 kb murine Glutathione peroxidase 5 (GPX5) promoter can be used to target transgene expression into the epididymis while the 3.8 kb Cysteine-rich secretory protein-1 (CRISP-1) promoter can be used to target transgene expression into the testis. Although the visualisation of EGFP in living cells in culture usually poses few problems, the detection of EGFP in tissue sections can be more difficult because soluble EGFP molecules can be lost if the cell membrane is damaged by freezing, sectioning, or permeabilisation. Furthermore, the fluorescence of EGFP is dependent on its conformation. Therefore, fixation protocols that immobilise EGFP may also destroy its usefulness as a fluorescent reporter. We therefore developed a novel tissue preparation and preservation techniques for EGFP. In addition, fluorescence spectrophotometry with epididymal epithelial cells in suspension revealed the expression of functional purinergic, adrenergic, cholinergic and bradykinin receptors in these cell lines (mE-Cap27 and mE-Cap28).

In conclusion, we developed new tools for studying the role of the epididymis in sperm maturation. We developed a new technique to analyse GPCR dependent Ca2+ signalling in living slices of mouse caput epididymis. In addition, we improved the method of detecting reporter gene expression. Furthermore, we characterised two epididymis-specific gene promoters, analysed the expression of GPCRs in epididymal epithelial cells and developed a novel technique for measurement of secretion from cells.