Diverse Routes from School, via Higher Education, to Employment. A Comparison of Nine European Countries

Diverse Routes from School, via Higher Education, to Employment. A Comparison of Nine European Countries 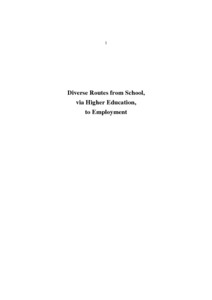 The central theme for this study is graduate employment and employability in European-wide discussion. In this study, the complex relationships between higher education and the world of work are explored from the vantage point of how individuals make use of the higher education system in their transition from education to employment. The variation among individual transition processes in nine European countries is analysed with the help of a comparable graduate survey. Countries in this study are Italy, Spain, France, Austria, Germany, the Netherlands, the United Kingdom, Finland, and Norway. The data used for the study is commonly known as the “CHEERS” or “Careers after Higher Education, A European Research Survey.” The data was collected in 1999. The study discusses the possibilities and limitations the higher education system has in supporting the initial education-to-work transitions of youth. The study also addresses problems with comparing national higher education systems in terms of enrolment and graduate employability. A central purpose for this study is to reflect on concerns about the prolongation of individual transitions with a framework that simultaneously considers both the graduate employability and the duration of the education-to-work transition process.

The key concept for this study is the standard student/graduate; synonym concepts are the traditional and the conventional student/graduate. Standard graduates are relatively young individuals who are performing their initial transition from education to working-life and who complete the degree-earning process within the stipulated time frame. In all nine countries, standard graduates make up a considerable share of the student flow, passing from higher education to the labour markets. The share of standard graduates is by far the largest in France, where they comprise the overwhelming mass. The proportion of the standard graduates is the lowest in Italy, Finland, and Austria where approximately one in four graduates completed the process of higher education within the stipulated time frame. Of the nine countries compared, employability of the whole graduate population is the greatest in Norway, the UK, Finland, and the Netherlands. Compared with employability of the whole graduate population, variation among the countries is considerably reduced when reviewing the employability of only the standard graduates. Thereby, even though the ranking among countries remains largely unchanged, the variations among them are smaller when the duration of degree earning process is standardized.

The study also discusses other ideal types of student careers (or transition processes) besides the standard student/graduate. Results of regression analyses indicate that that at the pan-European level analysis, the graduate labour markets are not heavily segmented in terms of the type of the individual transition process. When considering within-country differences between the graduates, the field of studies is clearly a more powerful explanatory variable than the type of the transition process. There are, nevertheless, clear indications that, irrespective of the country, chances of finding a high status job are, on the average, highest amongst those who graduate within the stipulated duration of the degree program and who thereby have experienced the standard student career, whereas, participating in working life while studying protects against unemployment after finishing one’s degree.