Novel Roles of HCG/LH Signalling in the Mouse Mammary Gland and its Tumorigenesis.

Novel Roles of HCG/LH Signalling in the Mouse Mammary Gland and its Tumorigenesis. 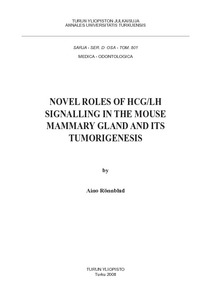 Breast cancer is the most common cancer in women, and its development is intimately related to hormonal factors, but how hormones affect breast physiology and tumorigenesis is not sufficiently known. Pregnancy elicits long-term protection from breast cancer, but during the first ten years after pregnancy, breast cancer risk is increased.

In previous studies, there has been conflicting data on the role of human chorionic gonadotropin (HCG) and the functionality of its receptor in extragonadal tissues. The aim of this study was to elucidate the role of chronically elevated HCG in mouse physiology. We have created a transgenic (TG) mouse model that overexpresses HCG. HCG is similar to lutenizing hormone (LH), but is secreted almost solely by the placenta during pregnancy. HCG and LH both bind to the LH receptor (LHR). In the current study, mammary gland tumors were observed in HCG TG mice. We elucidated the role of HCG in mammary gland signalling and the effects of LHR mediated signalling in mouse mammary gland gene expression. We also studied the effects of HCG in human breast epithelial cell cultures.

Several endocrine disturbances were observed in HCGβ TG female mice, resulting in precocious puberty, infertility, obesity and pituitary and mammary gland tumors. The histology of the mammary gland tumors of HCGβ TG females resembled those observed in mouse models with activated Wnt/β-catenin signalling pathway. Wnts are involved in stem cell regulation and tumorigenesis, and are hormonally regulated in the mammary gland. We observed activated β-catenin signalling and elevated expression of Wnt5b and Wnt7b in TG tumors and mammary glands. Furthermore, we discovered that HCG directly regulates the expression of Wnt5b and Wnt7b in the mouse mammary gland. Pharmacological treatment with HCG also caused upregulation of several Wnt-pathway target genes in ovariectomized wild type (WT) mice in the presence of physiological concentrations of estradiol and progesterone. In addition, differential expression of several metabolic genes was observed, suggesting that HCG affects adipocyte function or glucose metabolism. When WT mice were transplanted with LHR deficient or wild type WT mammary epithelium, differential expression of several genes affecting the Wnt-signalling pathway was observed in microarray analysis. Diminished expression of several genes associated with LHR function in other tissues, such as the ovary, was observed in mammary glands deficient of epithelial LHR. In cultured human mammary epithelial cells HCG upregulated the expression of WNT5B, WNT7B similar to mouse, suggesting that the observations found are relevant in human physiology. These studies suggest that HCG/LHR signalling affects gene expression in non-gonadal tissues, and that Wnt-signalling is regulated by HCG/LH in human and mouse mammary glands.