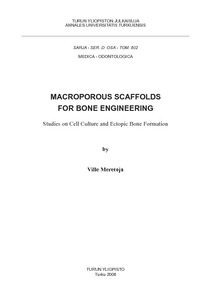 Bone engineering is a rapidly developing area of reconstructive medicine where bone inducing factors and/or cells are combined with a scaffold material to regenerate the structure and function of the original tissue. The aim of this study was to compare the suitability of different macroporous scaffold types for bone engineering applications. The two scaffold categories studied were a) the mechanically strong and stable titanium fiber meshes and b) the elastic and biodegradable porous polymers. Furthermore, bioactive modifications were applied to these basic scaffold types, and their effect on the osteogenic responses was evaluated in cell culture and ectopic bone formation studies.

The osteogenic phenotype of cultured cell-scaffold constructs was heightened with a sol-gel derived titania coating, but not with a mixed titania-silica coating. The latter coating also resulted in delayed ectopic bone formation in bone marrow stromal cell seeded scaffolds. However, the better bone contact in early implantation times and more even bone tissue distribution at later times indicated enhanced osteoconductivity of both the coated scaffold types. Overall, the most promising bone engineering results were obtained with titania coated fiber meshes.

Elastic and biodegradable poly(ε-caprolactone/D,L-lactide) based scaffolds were also developed in this study. The degradation rates of the scaffolds in vitro were governed by the hydrophilicity of the polymer matrix, and the porous architecture was controlled by the amount and type of porogen used. A continuous phase macroporosity was obtained using a novel CaCl2 • 6H2O porogen. Dynamic culture conditions increased cell invasion, but decreased cell numbers and osteogenicity, within the scaffolds. Osteogenic differentiation in static cultures and ectopic bone formation in cell seeded scaffolds were enhanced in composites, with 30 wt-% of bioactive glass filler.