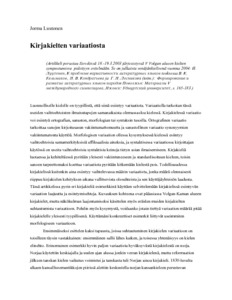 On the variation in literary languages

The article discusses the formation and development of several literary languages. The main objects of the study are the Finno-Ugric languages spoken in the Volga-Kama region (Russia), and Chuvash, but, for comparison, Norwegian, Arabic, Russian, Finnish and some other Finno-Ugric languages are treated, as well. A general classification of cases where linguistic variation tends to occur in standard languages is put forward. The author also discusses the question whether some kind of universal “normal” amount of variation can be defined for literary languages. The conclusion is that the degree of variation allowed in a literary norm is highly language-specific and depends on the characteristics of the linguistic situation and the history of the literary standard.