The central histaminergic neurons in vitro, and their neuroprotective role in excitotoxic cell death in the postnatal rat hippocampus.

The central histaminergic neurons in vitro, and their neuroprotective role in excitotoxic cell death in the postnatal rat hippocampus. 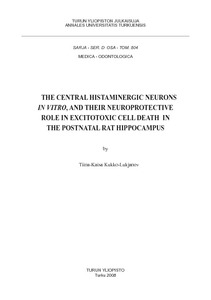 Histamine acts as a neurotransmitter in the central nervous system. Brain histamine in synthesized in neurons located to the posterior hypothalamus, from where these neurons send their projections to different parts of the brain. Released histamine participates in the regulation of several physiological functions such as arousal, attention and body homeostasis. Disturbances in the histaminergic system have been detected in diseases such as epilepsy, sleep disorders, anxiety, depression, Alzheimer’s disease, and schizophrenia. The purpose of this thesis was to develop optimal culture conditions for the histaminergic neurons, to study their detailed morphology, and to find out their significance in the kainic acid (KA)-induced neuronal death in the immature rat hippocampus.

The morphology of the histaminergic neurons in vitro was comparable with the earlier findings. Histamine-containing vesicles were found in the axon but also in the cell body and dendrites suggesting a possibility for the somatodendritic release. Moreover, histamine was shown to be colocalized with the vesicular monoamine transporter 2 (VMAT2) suggesting that VMAT2 transports histamine to the subcellular storage vesicles. Furthermore, histamine was localized with γ-aminobutyric acid (GABA) in distinct storage vesicles and with neuropeptide galanin partly in the same storage vesicles suggesting different corelease mechanisms for GABA and galanin with histamine.

In the organotypic hippocampal slice cultures, KA-induced neuronal death was first detected 12 h after the treatment being restricted mainly to the CA3 subregion. Moreover, cell death was irreversible, since the 48 h recovery period did not save the cells, but instead increased the damage. Finally, neuronal death was suggested to be necrotic, since intracellular apoptotic pathways were not activated, and the morphological changes detected with the electron microscopy were characteristic for necrosis.

In the coculture system of the hippocampal and posterior hypothalamic slices, histaminergic neurons significantly decreased epileptiform burst activity and neuronal death in the hippocampal slices, this effect being mediated by histamine 1 (H1) and 3 (H3) receptors.

In conclusion, the histaminergic neurons were maintained succesfully in the in vitro conditions exhibiting comparable morphological characteristics as detected earlier in vivo. Moreover, they developed functional innervations within the hippocampal slices in the coculture system. Finally, the KA-induced regionspecific, irreversible and necrotic hippocampal pyramidal cell damage was significantly decreased by the histaminergic neurons through H1 and H3 receptors.