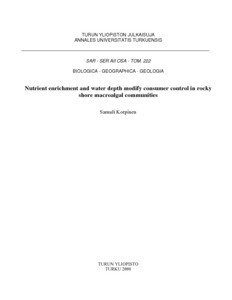 The objective of my thesis is to assess mechanisms of ecological community control in macroalgal communities in the Baltic Sea. In the top-down model, predatory fish feed on invertebrate mesograzers, releasing algae partly from grazing pressure. Such a reciprocal relationship is called trophic cascade. In the bottom-up model, nutrients increase biomass in the food chain. The nutrients are first assimilated by algae and, via food chain, increase also abundance of grazers and predators. Previous studies on oceanic shores have described these two regulative mechanisms in the grazer - alga link, but how they interact in the trophic cascades from fish to algae is still inadequately known. Because the top-down and bottom-up mechanisms are predicted to depend on environmental disturbances, such as wave stress and light, I have studied these models at two distinct water depths.

There are five factorial field experiments behind the thesis, which were all conducted in the Finnish Archipelago Sea. In all the experiments, I studied macroalgal colonization - either density, filament length or biomass - on submerged colonization substrates. By excluding predatory fish and mesograzers from the algal communities, the studies compared the strength of the top-down control to natural algal communities. A part of the experimental units were, in addition, exposed to enriched nitrogen and phosphorus concentrations, which enabled testing of bottom-up control. These two models of community control were further investigated in shallow (<1 m) and deep (ca. 3 m) water. Moreover, the control mechanisms were also expected to depend on grazer species. Therefore different grazer species were enclosed into experimental units and their impacts on macroalgal communities were followed specifically.

The community control in the Baltic rocky shores was found to follow theoretical predictions, which have not been confirmed by field studies before. Predatory fish limited grazing impact, which was seen as denser algal communities and longer algal filaments. Nutrient enrichment increased density and filament length of annual algae and, thus, changed the species composition of the algal community. The perennial alga Fucus vesiculosusA and the red alga Ceramium tenuicorne suffered from the increased nutrient availabilities. The enriched nutrient conditions led to denser grazer fauna, thereby causing strong top-down control over both the annual and perennial macroalgae. The strength of the top-down control seemed to depend on the density and diversity of grazers and predators as well as on the species composition of macroalgal assemblages. The nutrient enrichment led to, however, weaker limiting impact of predatory fish on grazer fauna, because fish stocks did not respond as quickly to enhanced resources in the environment as the invertebrate fauna.

This thesis assessed the mechanisms of community control in three-level food chains and did not take into account higher predators. Such predators in the Baltic Sea are, for example, cormorant, seals, white-tailed sea eagle, cod and salmon. All these predatory species were recently or are currently under intensive fishing, hunting and persecution, and their stocks have only recently increased in the region. Therefore, it is possible that future densities of top predators may yet alter the strengths of the controlling mechanisms in the Baltic littoral zone.