Proportionality and Party Success in Europe

Proportionality and Party Success in Europe 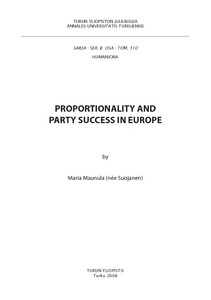 This thesis consists of four articles and an introductory section. The main research questions in all the articles are about proportionality and party success in Europe, at European, national or district levels. Proportionality in this thesis denotes the proximity of seat shares parties receive compared to their respective vote shares, after the electoral system’s allocation process. This proportionality can be measured through numerous indices that illustrate either the overall proportionality of an electoral system or a particular election. The correspondence of a single party’s seat shares to its vote shares can also be measured. The overall proportionality is essential in three of the articles (1, 2 and 4), where the system’s performance is studied by means of plots. In article 3, minority party success is measured by advantage-ratios that reveal single party’s winnings or losses in the votes to seat allocation process.

The first article asks how proportional are the European parliamentary (EP) electoral systems, how do they compare with results gained from earlier studies and how do the EP electoral systems treat different sized parties. The reasons for different outcomes are looked for in explanations given by traditional electoral studies i.e. electoral system variables. The countries studied (EU15) apply electoral systems that vary in many important aspects, even though a certain amount of uniformity has been aspired to for decades. Since the electoral systems of the EP elections closely resemble the national elections, the same kinds of profiles emerge as in the national elections. The electoral systems indeed treat the parties differentially and six different profile types can be found. The counting method seems to somewhat determine the profile group, but the strongest variables determining the shape of a countries’ profile appears to be the average district magnitude and number of seats allocated to each country. The second article also focuses on overall proportionality performance of an electoral system, but here the focus is on the impact of electoral system changes. I have developed a new method of visualizing some previously used indices and some new indices for this purpose. The aim is to draw a comparable picture of these electoral systems’ changes and their effects. The cases, which illustrate this method, are four elections systems, where a change has occurred in one of the system variables, while the rest remained unchanged. The studied cases include the French, Greek and British European parliamentary systems and the Swedish national parliamentary system. The changed variables are electoral type (plurality changed to PR in the UK), magnitude (France splitting the nationwide district into eight smaller districts), legal threshold (Greece introducing a three percent threshold) and counting method (d’Hondt was changed to modified Sainte-Laguë in Sweden). The radar plots from elections after and before the changes are drawn for all country cases. When quantifying the change, the change in the plots area that is created has also been calculated. Using these radar plots we can observe that the change in electoral system type, magnitude, and also to some extent legal threshold had an effect on overall proportionality and accessibility for small parties, while the change between the two highest averages counting method had none.

The third article studies the success minority parties have had in nine electoral systems in European heterogeneous countries. This article aims to add more motivation as to why we should care how different sized parties are treated by the electoral systems. Since many of the parties that aspire to represent minorities in European countries are small, the possibilities for small parties are highlighted. The theory of consociational (or power-sharing) democracy suggests that, in heterogeneous societies, a proportional electoral system will provide the fairest treatment of minority parties. The OSCE Lund Recommendations propose a number of electoral system features, which would improve minority representation. In this article some party variables, namely the unity of the minority parties and the geographical concentration of the minorities were included among possible explanations. The conclusions are that the central points affecting minority success were indeed these non-electoral system variables rather than the electoral system itself. Moreover, the size of the party was a major factor governing success in all the systems investigated; large parties benefited in all the studied electoral systems.

In the fourth article the proportionality profiles are again applied, but this time to district level results in Finnish parliamentary elections. The level of proportionality distortion is also studied by way of indices. The average magnitudes during the studied periodrange from 7.5 to 26.2 in the Finnish electoral districts and this opens up unequal opportunities for parties in different districts and affects the shape of the profiles. The intra-country case allows the focus to be placed on the effect of district magnitude, since all other electoral systems are kept constant in an intra-country study. The time span in the study is from 1962 to 2007, i.e. the time that the districts have largely been the same geographically. The plots and indices tell the same story, district magnitude and electoral alliances matter. The district magnitude is connected to the overall proportionality of the electoral districts according to both indices, and the profiles are, as expected, also closer to perfect proportionality in large districts. Alliances have helped some small parties to gain a much higher seat share than their respective vote share and these successes affect some of the profiles. The profiles also show a consistent pattern of benefits for the small parties who ally with the larger parties.