An Experimental Model of Prostatic Inflammation for Drug Discovery

An Experimental Model of Prostatic Inflammation for Drug Discovery 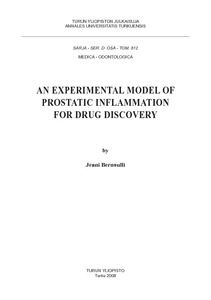 There is increasing evidence to support a significant role for chronic non-bacterial, prostatic inflammation in the development of human voiding dysfunction and prostate cancer. Their increased prevalence with age suggests that the decrease of testosterone concentration and/or the ratio of testosterone-to-estradiol in serum may have a role in their development. The main objective of this study was to explore prostatic inflammation and its relationship with voiding dysfunction and prostate carcinogenesis by developing an experimental model. A novel selective estrogen receptor modulator (SERM), fispemifene, was tested for the prevention and treatment of prostatic inflammation in this model.

Combined treatment of adult Noble rats with testosterone and estradiol for 3 to 6 weeks induced gradually developing prostatic inflammation in the dorsolateral prostatic lobes. Inflammatory cells, mainly T-lymphocytes, were first seen around capillaries. Thereafter, the lymphocytes migrated into the stroma and into periglandular space. When the treatment time was extended to 13 weeks, the number of inflamed acini increased. Urodynamical recordings indicated voiding dysfunction. When the animals had an above normal testosterone and estradiol concentrations but still had a decreased testosterone-to-estradiol ratio in serum, they developed obstructive voiding. Furthermore, they developed precancerous lesions and prostate cancers in the ducts of the dorsolateral prostatic lobes. Interestingly, inflammatory infiltrates were observed adjacent to precancerous lesions but not in the adjacency of adenocarcinomas suggesting that inflammation has a role in the early stages of prostate carcinogenesis.

Fispemifene, a novel SERM tested in this experimental model, showed anti-inflammatory action by attenuating the number of inflamed acini in the dorsolateral prostate. Fispemifene exhibited also antiestrogenic properties by decreasing expression of estrogen-induced biomarkers in the acinar epithelium. These findings suggest that SERMs could be considered as a new therapeutic possibility in the prevention and in the treatment of chronic prostatic inflammation