The role of endothelial enzymes NOS, VAP-1 and CD73 in acute lung injury

The role of endothelial enzymes NOS, VAP-1 and CD73 in acute lung injury 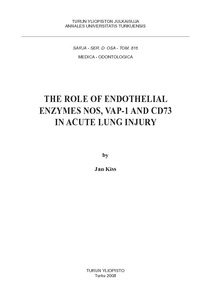 Acute lung injury (ALI) is a syndrome of acute hypoxemic respiratory failure with bilateral pulmonary infiltrates that is not caused by left atrial hypertension. Since there is no effective treatment available, this frequent clinical syndrome significantly contributes to mortality of both medical and surgical patients. Great majority of the patients with the syndrome suffers from indirect ALI caused by systemic inflammatory response syndrome (SIRS). Sepsis, trauma, major surgery and severe burns, which represent the most common triggers of SIRS, often induce an overwhelming inflammatory reaction leading to dysfunction of several vital organs. Studies of indirect ALI due to SIRS revealed that respiratory dysfunction results from increased permeability of endothelium. Disruption of endothelial barrier allows extravasation of protein-rich liquid and neutrophils to pulmonary parenchyma.

Both under normal conditions and in inflammation, endothelial barrier function is regulated by numerous mechanisms. Endothelial enzymes represent one of the critical control points of vascular permeability and leukocyte trafficking. Some endothelial enzymes prevent disruption of endothelial barrier by production of anti-inflammatory substances. For instance, nitric oxide synthase (NOS) down-regulates leukocyte extravasation in inflammation by generation of nitric oxide. CD73 decreases vascular leakage and neutrophil emigration to inflamed tissues by generation of adenosine. On the other hand, vascular adhesion protein-1 (VAP-1) mediates leukocyte trafficking to the sites of inflammation both by generation of pro-inflammatory substances and by physically acting as an adhesion molecule.

The aims of this study were to define the role of endothelial enzymes NOS, CD73 and VAP-1 in acute lung injury. Our data suggest that increasing substrate availability for NOS reduces both lung edema and neutrophil infiltration and this effect is not enhanced by concomitant administration of antioxidants. CD73 protects from vascular leakage in ALI and its up-regulation by interferon-β represents a novel therapeutic strategy for treatment of this syndrome. Enzymatic activity of VAP-1 mediates neutrophil infiltration in ALI and its inhibition represents an attractive approach to treat ALI.