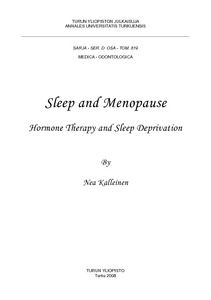 This study evaluated the effect of menopause, hormone therapy (HT) and aging on sleep. Further, the mechanisms behind these effects were examined by studying the associations between sleep and the nocturnal profiles of sleep-related hormones. Crosssectional study protocols were used to evaluate sleep in normal conditions and during recovery from sleep deprivation. The effect of initiation of HT on sleep and sleeprelated hormones was studied in a prospective controlled trial. Young, premenopausal and postmenopausal women were studied, and the methods included polysomnography, 24-h blood sampling, questionnaires and cognitive tests of attention.

Postmenopausal women were less satisfied with their sleep quality than premenopausal women, but this was not reflected in sleepiness or attention. The objective sleep quality was mainly similar in pre- and postmenopausal women, but differed from young women. The recovery mechanisms from sleep deprivation were relatively well-preserved after menopause. HT offered no advantage to sleep after sleep deprivation or under normal conditions. The decreased growth hormone (GH) and prolactin (PRL) levels after menopause were reversible with HT. Neither menopause nor HT had any effect on cortisol levels. In premenopausal women, HT had only minor effects on PRL and cortisol levels. The temporal link between GH and slow wave sleep (SWS) was weaker after menopause. PRL levels were temporally associated with sleep stages, and higher levels were seen during SWS and lower during rapid-eye-movement (REM) sleep.

Sleep quality after menopause is better determined by age than by menopausal state. Although HT restores the decreased levels of GH and PRL after menopause, it offers no advantage to sleep quality under normal conditions or after sleep deprivation.