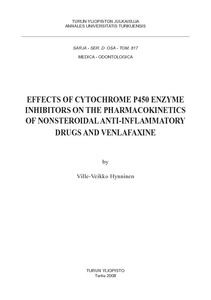 Cytochrome P450 (CYP) enzymes play a pivotal role in the metabolism of many drugs. Inhibition of CYP enzymes usually increases the plasma concentrations of their substrate drugs and can thus alter the safety and efficacy of these drugs. The metabolism of many widely used nonsteroidal antiinflammatory drugs (NSAIDs) as well as the metabolism of the antidepressant venlafaxine is nown to be catalyzed by CYP enzymes. In the present studies, the effect of CYP inhibition on the armacokinetics and pharmacodynamics of NSAIDs and venlafaxine was studied in clinical trials with healthy volunteers and with a crossover design, by using different antifungal agents as CYP inhibitors.