Threat Simulation- The Function of Dreaming? 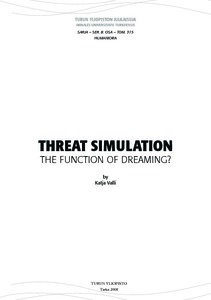 Dreaming is a pure form of phenomenality, created by the brain untouched by external stimulation or behavioral activity, yet including a full range of phenomenal contents. Thus, it has been suggested that the dreaming brain could be used as a model system in a biological research program on consciousness (Revonsuo, 2006). In the present thesis, the philosophical view of biological realism is accepted, and thus, dreaming is considered as a natural biological phenomenon, explainable in naturalistic terms.

The major theoretical contribution of the present thesis is that it explores dreaming from a multidisciplinary perspective, integrating information from various fields of science, such as dream research, consciousness research, evolutionary psychology, and cognitive neuroscience. Further, it places dreaming into a multilevel framework, and investigates the constitutive, etiological, and contextual explanations for dreaming. Currently, the only theory offering a full multilevel explanation for dreaming, that is, a theory including constitutive, etiological, and contextual level explanations, is the Threat Simulation Theory (TST) (Revonsuo, 2000a; 2000b). The empirical significance of the present thesis lies in the tests conducted to test this specific theory put forth to explain the form, content, and biological function of dreaming. The first step in the empirical testing of the TST was to define exact criteria for what is a ‘threatening event’ in dreams, and then to develop a detailed and reliable content analysis scale with which it is possible to empirically explore and quantify threatening events in dreams. The second step was to seek answers to the following questions derived from the TST: How frequent threatening events are in dreams? What kind of qualities these events have? How threatening events in dreams relate to the most recently encoded or the most salient memory traces of threatening events experienced in waking life? What are the effects of exposure to severe waking life threat on dreams?

The results reveal that threatening events are relatively frequent in dreams, and that the simulated threats are realistic. The most common threats include aggression, are targeted mainly against the dream self, and include simulations of relevant and appropriate defensive actions. Further, real threat experiences activate the threat simulation system in a unique manner, and dream content is modulated by the activation of long term episodic memory traces with highest negative saliency. To sum up, most of the predictions of the TST tested in this thesis received considerable support.

The TST presents a strong argument that explains the specific design of dreams as threat simulations. The TST also offers a plausible explanation for why dreaming would have been selected for: because dreaming interacted with the environment in such a way that enhanced fitness of ancestral humans. By referring to a single threat simulation mechanism it furthermore manages to explain a wide variety of dream content data that already exists in the literature, and to predict the overall statistical patterns of threat content in different samples of dreams. The TST and the empirical tests conducted to test the theory are a prime example of what a multidisciplinary approach to mental phenomena can accomplish. Thus far, dreaming seems to have always resided in the periphery of science, never regarded worth to be studied by the mainstream. Nevertheless, when brought to the spotlight, the study of dreaming can greatly benefit from ideas in diverse branches of science. Vice versa, knowledge learned from the study of dreaming can be applied in various disciplines. The main contribution of the present thesis lies in putting dreaming back where it belongs, that is, into the spotlight in the cross-road of various disciplines.