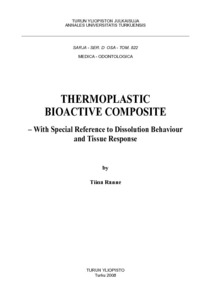 Bioactive glasses are surface-active ceramic materials which support and accelerate bone growth in the body.
During the healing of a bone fracture or a large bone defect, fixation is often needed. The aim of this thesis was to determine the dissolution behaviour and biocompatibility of a composite consisting of poly(ε-caprolactone-co-DL-lactide) and bioactive glass (S53P4). In addition the applicability as an injectable material straight to a bone defect was assessed.

In in vitro tests the dissolution behaviour of plain copolymer and composites containing bioactive glass granules was evaluated, as well as surface reactivity and the material’s capability to form apatite in simulated body fluid (SBF). The human fibroblast proliferation was tested on materials in cell culture. In in vivo experiments, toxicological tests, material degradation and tissue reactions were tested both in subcutaneous space and in experimental bone defects.

The composites containing bioactive glass formed a unified layer of apatite on their surface in SBF. The size and amount of glass granules affected the degradation of polymer matrix, as well the material’s surface reactivity. In cell culture on the test materials the human gingival fibroblasts proliferated and matured faster compared with control materials. In in vitro tests a connective tissue capsule was formed around the specimens, and became thinner in the course of time. Foreign body cell reactions in toxicological tests were mild. In experimental bone defects the specimens with a high concentration of small bioactive glass granules (<45 μm) formed a dense apatite surface layer that restricted the bone ingrowth to material. The range of large glass granules (90-315 μm) with high concentrations formed the best bonding with bone, but slow degradation on the copolymer restricted the bone growth only in the superficial layers.

In these studies, the handling properties of the material proved to be good and tissue reactions were mild. The reactivity of bioactive glass was retained inside the copolymer matrix, thus enabling bone conductivity with composites. However, the copolymer was noticed to degradate too slowly compared with the bone healing. Therefore, the porosity of the material should be increased in order to improve tissue healing.