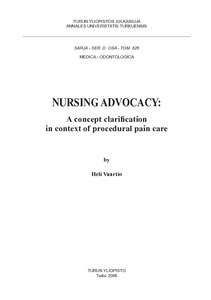 The purpose of this study was to clarify the concept of advocacy in context of procedural pain care and to investigate the implementation of advocacy in that context.

First, the concept of advocacy was described on the basis of a literature review (n = 89 empirical studies from 1990 to 2003). Then, the concept was described in the context of procedural pain care on the basis of interview data (n = 22 patients, 21 nurses) in a medical and surgical context. In the second phase, an instrument exploring the content of advocacy and the implementation of advocacy in context of procedural pain care was developed and validated. Then, the content of advocacy and implementation of it was explored in a sample of otolaryngeal patients (n = 405) and nurses (n = 118) in 12 hospitals. In the third phase, an update literature review (n = 35 empirical studies from 2003 to 2007) was conducted, and all data from phases one and two were reviewed in order to refine the elements the concept of advocacy, and the relationships between these elements.

As a result of this study, advocacy in context of procedural pain care was defined as consisting of the dual aspects of patient advocacy and professional advocacy, and called nursing advocacy. It was divided into dimensions and subdimensions in which patient and nurse empowerment seems to play a vital role. All the data obtained lend support to this definition of nursing advocacy. Patients and nurses felt that nearly all of the activities that they considered as advocacy were implemented.