The grammar of psychosis

The grammar of psychosis 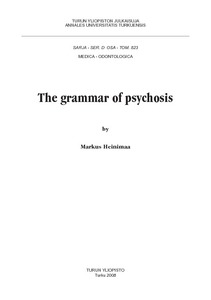 This thesis is concerned with the philosophical grammar of certain psychiatric concepts, which play a central role in delineating the field of psychiatric work. The concepts studied are ‘psychosis’, ‘delusion’, ‘person’, ‘understanding’ and ‘incomprehensibility’.

The purpose of this conceptual analysis is to provide a more perspicuous view of the logic of these concepts, how psychiatric work is constituted in relation to them, and what this tells us about the relationships between the conceptual and the empirical in psychiatric concepts.

The method used in the thesis is indebted primarily to Ludwig Wittgenstein’s conception of philosophy, where we are urged to look at language uses in relation to practices in order to obtain a clearer overview of practices of interest; this will enable us to resolve the conceptual problems related to these practices.

This questioning takes as its starting point the concept of psychosis, a central psychiatric concept during the twentieth century. The conceptual analysis of ‘psychosis’ shows that the concept is logically dependent on the concepts of ‘understanding’ and ‘person’. Following the lead found in this analysis, the logic of person-concepts in psychiatric discourse is analysed by a detailed textual analysis of a psychiatric journal article. The main finding is the ambiguous uses of ‘person’, enabling a specifically psychiatric form of concern in human affairs.

Finally, some of the findings gained in these studies are ‘put into practice’ in studying the more practical question of the conceptual and ethical problems associated with the concept of ‘prodromal symptom of schizophrenia’ and the agenda of early detection and intervention in schizophrenia more generally.