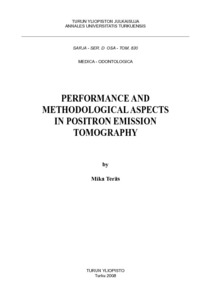 Performance standards for Positron emission tomography (PET) were developed to be able to compare systems from different generations and manufacturers. This resulted in the NEMA methodology in North America and the IEC in Europe. In practices, the NEMA NU 2- 2001 is the method of choice today. These standardized methods allow assessment of the physical performance of new commercial dedicated PET/CT tomographs.

The point spread in image formation is one of the factors that blur the image. The phenomenon is often called the partial volume effect. Several methods for correcting for partial volume are under research but no real agreement exists on how to solve it. The influence of the effect varies in different clinical settings and it is likely that new methods are needed to solve this problem.

Most of the clinical PET work is done in the field of oncology. The whole body PET combined with a CT is the standard investigation today in oncology. Despite the progress in PET imaging technique visualization, especially quantification of small lesions is a challenge. In addition to partial volume, the movement of the object is a significant source of error. The main causes of movement are respiratory and cardiac motions. Most of the new commercial scanners are in addition to cardiac gating, also capable of respiratory gating and this technique has been used in patients with cancer of the thoracic region and patients being studied for the planning of radiation therapy.

For routine cardiac applications such as assessment of viability and perfusion only cardiac gating has been used. However, the new targets such as plaque or molecular imaging of new therapies require better control of the cardiac motion also caused by respiratory motion. To overcome these problems in cardiac work, a dual gating approach has been proposed. In this study we investigated the physical performance of a new whole body PET/CT scanner with
NEMA standard, compared methods for partial volume correction in PET studies of the brain and developed and tested a new robust method for dual cardiac-respiratory gated PET with phantom, animal and human data.

Results from performance measurements showed the feasibility of the new scanner design in 2D and 3D whole body studies. Partial volume was corrected, but there is no best method among those tested as the correction also depends on the radiotracer and its distribution. New methods need to be developed for proper correction. The dual gating algorithm generated is shown to handle dual-gated data, preserving quantification and clearly eliminating the majority of contraction and respiration movement