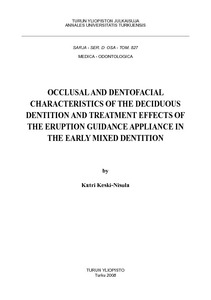 The aim of this investigation was to analyze the dental occlusion in the deciduous dentition, and the effects of orthodontic treatment carried out in the early mixed dentition with the eruption guidance appliance.

The deciduous occlusion and craniofacial morphology of 486 children (244 girls and 242 boys) were investigated at the onset of the mixed dentition period (mean age 5.1 years, range 4.0-7.8 years). Treatment in the treatment group and follow-up in the control group were started when the first deciduous incisor was exfoliated (T1) and ended when all permanent incisors and first molars were fully erupted (T2). The mean age of the children was 5.1 years (SD 0.5) at T1 and 8.4 years (SD 0.5) at T2. Treatment was carried out with the eruption guidance appliance. Occlusal changes that took place in 167 children were compared with those of 104 untreated control children. Pre- and post-treatment cephalometric radiographs were taken, and the craniofacial morphology of 115 consecutively treated children was compared with that of 104 control children.

The prevalence of malocclusion in the deciduous dentition was 68% or 93% depending on how the cut-off value between the acceptable and non-acceptable occlusal characteristic was defined. The early dentofacial features of children with distal occlusion, large overjet and deepbite differed from those with normal occlusion. However, the skeletal pattern of these three malocclusions showed considerable similarity each being characterized by a retrusive mandible, small maxillo-mandibular difference, convex profile, retrusive lower incisors, and large interincisal angle. In the treatment group, overjet and overbite decreased significantly from T1 to T2. Following treatment, a tooth-to-tooth contact was found in 99% of the treated children but only in 24% of the controls. A Class I molar relationship was observed in 90% of the children in the treatment group, and in 48% in the control group. Good alignment of the incisors was observed in 98% of the treated children, whereas upper crowding was found in 32% and lower crowding in 47% of the controls. A significant difference between the groups was found in the mandibular length, midfacial length and maxillo-mandibular differential. The occlusal correction, brought about by the eruption guidance appliance, was achieved mainly through changes in the dentoalveolar region of the mandible. In addition, the appliance seemed to enhance the growth of the mandible.

Treatment in the early mixed dentition using the eruption guidance appliance is an effective method to normalize occlusion and reduce further need of orthodontic treatment. Only few spontaneous corrective changes can be expected without active intervention.