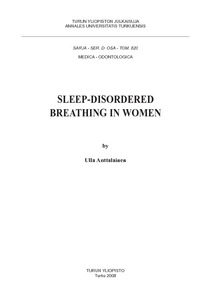 Sleep-disordered breathing (SDB) is underdiagnosed in women, probably due to the different gender-related manifestation. We investigated the differences in presentation, symptoms and co-morbidities of SDB in men and in pre- and postmenopausal women by a clinical, retrospective, cross-sectional study of 601 consecutively referred women and 233 age- and BMI-matched male-female pairs studied with the static-chargesensitive bed (SCSB) and an oximeter. Data on the use of nasal CPAP were gathered from the Paimio hospital database, and the co-morbidity information was based on reimbursed medication data from the National Agency for Medicines and the Social Insurance institution.

The abnormal breathing episodes at night were more frequent in men than in women, and in postmenopausal women compared to premenopausal ones. Partial upper airway obstruction was the most common type of SDB in both genders but especially in females. BMI and the major symptoms of SDB were similar in pre- and postmenopausal women, and a menopause effect on symptoms was not found. CPAP adherence did not differ between symptomatic patients with partial upper airway obstruction and those presenting with conventional obstructive sleep apnea. Comorbidities were more frequent in SDB patients than in the general Finnish population. Compared to sleep apnea, partial upper airway obstruction was associated with a threefold prevalence of asthma and/or COPD in both genders, and with a 60% reduced prevalence of hypertension in females matched for age and BMI.

Our results emphasize that partial upper airway obstruction is not a milder form of SDB but a different entity, the severity of which is underestimated when using the conventional apnea-hypopnea index. It seems clinically relevant to diagnose and treat the co-morbidities and SDB also in patients with partial upper airway obstruction, especially in elderly and symptomatic women.