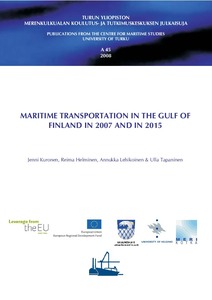 The Gulf of Finland is said to be one of the densest operated sea areas in the world. It is a shallow and economically vulnerable sea area with dense passenger and cargo traffic of which petroleum transports have a share of over 50 %. The winter conditions add to the risks of maritime traffic in the Gulf of Finland. It is widely believed that the growth of maritime transportation will continue also in the future.

The Gulf of Finland is surrounded by three very different national economies with, different maritime transportation structures. Finland is a country of high GDP/per capita with a diversified economic structure. The number of ports is large and the maritime transportation consists of many types of cargoes: raw materials, industrial products, consumer goods, coal and petroleum products, and the Russian transit traffic of e.g. new cars and consumer goods. Russia is a large country with huge growth potential; in recent years, the expansion of petroleum exports has lead to a strong economic growth, which is also apparent in the growth of maritime transports. Russia has been expanding its port activities in the Gulf of Finland and it is officially aiming to transport its own imports and exports through the Russian ports in the future; now they are being transported to great extend through the Finnish, Estonian and other Baltic ports. Russia has five ports in the Gulf of Finland.

Estonia has also experienced fast economic growth, but the growth has been slowing down already during the past couples of years. The size of its economy is small compared to Russia, which means the transported tonnes cannot be very massive. However, relatively large amounts of the Russian petroleum exports have been transported through the Estonian ports. The future of the Russian transit traffic in Estonia looks nevertheless uncertain and it remains to be seen how it will develop and if Estonia is able to find replacing cargoes if the Russian transit traffic will come to an end in the Estonian ports. Estonia’s own import and export consists of forestry products, metals or other raw materials and consumer goods. Estonia has many ports on the shores of the Gulf of Finland, but the port of Tallinn dominates the cargo volumes. In 2007, 263 M tonnes of cargoes were transported in the maritime traffic in the Gulf of Finland, of which the share of petroleum products was 56 %. 23 % of the cargoes were loaded or unloaded in the Finnish ports, 60 % in the Russian ports and 17 % in the Estonian ports. The largest ports were Primorsk (74.2 M tonnes) St. Petersburg (59.5 M tonnes), Tallinn (35.9 M tonnes), Sköldvik (19.8 M tonnes), Vysotsk (16.5 M tonnes) and Helsinki (13.4 M) tonnes.


Approximately 53 600 ship calls were made in the ports of the Gulf of Finland. The densest traffic was found in the ports of St. Petersburg (14 651 ship calls), Helsinki (11 727 ship calls) and Tallinn (10 614 ship calls) in 2007. The transportation scenarios are usually based on the assumption that the amount of transports follows the development of the economy, although also other factors influence the development of transportation, e.g. government policy, environmental aspects, and social and behavioural trends. The relationship between the development of transportation and the economy is usually analyzed in terms of the development of GDP and trade. When the GDP grows to a certain level, especially the international transports increase because countries of high GDP produce, consume and thus transport more. An effective transportation system is also a precondition for the economic development. In this study, the following factors were taken into consideration when formulating the future scenarios: maritime transportation in the Gulf of Finland 2007, economic development, development of key industries, development of infrastructure and environmental aspects in relation to maritime transportation. The basic starting points for the three alternative scenarios were: • the slow growth scenario: economic recession • the average growth scenario: economy will recover quickly from current instability • the strong growth scenario: the most optimistic views on development will realize According to the slow growth scenario, the total tonnes for the maritime transportation in the Gulf of Finland would be 322.4 M tonnes in 2015, which would mean a growth of 23 % compared to 2007. In the average growth scenario, the total tonnes were estimated to be 431.6 M tonnes – a growth of 64 %, and in the strong growth scenario 507.2 M tonnes – a growth of 93%. These tonnes were further divided into petroleum products and other cargoes by country, into export, import and domestic traffic by country, and between the ports. For petroleum products, the share of crude oil and oil products was estimated and the number of tanker calls in 2015 was calculated for each scenario.

However, the future development of maritime transportation in the GoF is dependent on so many societal and economic variables that it is not realistic to predict one exact point estimate value for the cargo tonnes for a certain scenario. Plenty of uncertainty is related both to the degree in which the scenario will come true as well as to the cause-effect relations between the different variables. For these reasons, probability distributions for each scenario were formulated by an expert group. As a result, a range for the total tonnes of each scenario was formulated and they are as follows: the slow growth scenario: 280.8 – 363 M tonnes (expectation value 322.4 M tonnes)