Externalities of Shipping in the Gulf of Finland until 2015

Externalities of Shipping in the Gulf of Finland until 2015 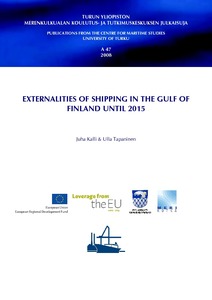 The algorithm estimates the ship-originated emissions of carbon dioxide (CO2), nitrogen oxides (NOx), sulphur oxides (SOx), particulates (PM) and the externalities for each year from 2007 to 2015. The total NOx emissions in the Gulf of Finland from the six ship types were almost 75.7 kilotons (Table 5.2) in 2007. The ship types are: passenger (including cruisers and ROPAX vessels), tanker, general cargo, Ro-Ro, container and bulk vessels. Due to the increase of traffic, the estimation for NOx emissions for 2015 is 112 kilotons. The NOx emission estimation for the whole Baltic Sea shipping is 370 kilotons in 2006 (Stipa & al, 2007).

The majority of the new car transit goes through Finland to Russia due to the lack of port capacity in Russia. The amount of cars was 339 620 vehicles (Statistics of Finnish Customs 2008) in 2005. The externalities are calculated for the transportation of passenger vehicles as follows: by ship to a Finnish port and, after that, by trucks to the Russian border checkpoint. The externalities are between 2 – 3 million Euros (year 2000 cost level) for each route. The ports included in the calculations are Hamina, Hanko, Kotka and Turku.

With the Euro-3 standard trucks, the port of Hanko would be the best choice to transport the vehicles. This is because of lower emissions by new trucks and the saved transport distance of a ship. If the trucks are more polluting Euro 1 level trucks, the port of Kotka would be the best choice. This indicates that the truck emissions have a considerable effect on the externalities and that the transportation of light cargo, such as passenger cars by ship, produces considerably high emission externalities.

The emission externalities approach offers a new insight for valuing the multiple traffic modes. However, the calculation of the marginal social costs based on the air emission externalities should not be regarded as a ready-made calculation system. The system is clearly in the need of some improvement but it can already be considered as a potential tool for political decision making.