Role of Membrane Transporters, P-Glycoprotein and Mrp1, in The Placental Transfer of Drugs With Special Reference to Saquinavir and Quetiapine

Role of Membrane Transporters, P-Glycoprotein and Mrp1, in The Placental Transfer of Drugs With Special Reference to Saquinavir and Quetiapine 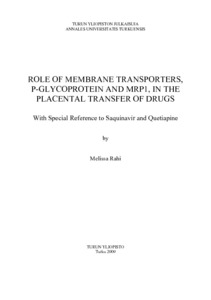 Drug transporting membrane proteins are expressed in various human tissues and blood-tissue barriers, regulating the transfer of drugs, toxins and endogenous compounds into or out of the cells. Various in vitro and animal experiments suggest that P-glycoprotein (P-gp) forms a functional barrier between maternal and fetal blood circulation in the placenta thereby protecting the fetus from exposure to xenobiotics during pregnancy. The multidrug resistance-associated protein 1 (MRP1) is a relatively less studied transporter protein in the human placenta.

The aim of this study series was to study the role of placental transporters, apical P-gp and basal MRP1, using saquinavir as a probe drug, and to study transfer of quetiapine and the role of P-gp in its transfer in the dually perfused human placenta/cotyledon. Furthermore, two ABCB1 (encoding P-gp) polymorphisms (c.3435C>T, p.Ile1145Ile and c.2677G>T/A, p.Ala893Ser/Thr) were studied to determine their impact on P-gp protein expression level and on the transfer of the study drugs. Also, the influence of the P-gp protein expression level on the transfer of the study drugs was addressed. Because P-gp and MRP1 are ATP-dependent drug-efflux pumps, it was studied whether exogenous ATP is needed for the function of ATP-dependent transporter in the present experimental model.

The present results indicated that the addition of exogenous ATP was not necessary for transporter function in the perfused human placental cotyledon. Saquinavir and quetiapine were both found to cross the human placenta; transplacental transfer (TPTAUC %) for saquinavir was <0.5% and for quetiapine 3.7%. Pharmacologic blocking of P-gp led to disruption of the blood-placental barrier (BPB) and increased the placental transfer of P-gp substrate, saquinavir, into the fetal circulation by 6- to 8-fold. In reversed perfusions P-gp, MRP1 and possibly OATP2B1 had a negligible role in the fetal-to-maternal transfer of saquinavir. The TPTAUC % of saquinavir was about 100-fold greater from the fetal side to the maternal side compared with the maternal-to-fetal transfer. P-gp activity is not likely to modify the placental transfer of quetiapine. Higher P-gp protein expression levels were associated with the variant allele 3435T, but no correlation was found between the TPTAUC % of saquinavir and placental P-gp protein expression.

The present results indicate that P-gp activity drastically affects the fetal exposure to saquinavir, and suggest that pharmacological blockade of the P-gp activity during pregnancy may pose an increased risk for adverse fetal outcome. The blockade of P-gp activity could be used in purpose to obtain higher drug concentration to the fetal side, for example, in prevention (to decrease virus transfer to fetal side) or in treating sick fetus.