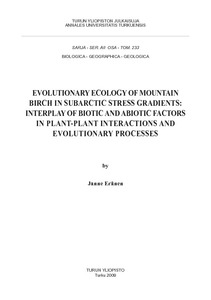 In nature, variation for example in herbivory, wind exposure, moisture and pollution impact often creates variation in physiological stress and plant productivity. This variation is seldom clear-cut, but rather results in clines of decreasing growth and productivity towards the high-stress end. These clines of unidirectionally changing stress are generally known as ‘stress gradients’. Through its effect on plant performance, stress has the capacity to fundamentally alter the ecological relationships between individuals, and through variation in survival and reproduction it also causes evolutionary change, i.e. local adaptations to stress and eventually speciation. In certain conditions local adaptations to environmental stress have been documented in a matter of just a few generations.

In plant-plant interactions, intensities of both negative interactions (competition) and positive ones (facilitation) are expected to vary along stress gradients. The stress-gradient hypothesis (SGH) suggests that net facilitation will be strongest in conditions of high biotic and abiotic stress, while a more recent ‘humpback’ model predicts strongest net facilitation at intermediate levels of stress. Plant interactions on stress gradients, however, are affected by a multitude of confounding factors, making studies of facilitation-related theories challenging. Among these factors are plant ontogeny, spatial scale, and local adaptation to stress. The last of these has very rarely been included in facilitation studies, despite the potential co-occurrence of local adaptations and changes in net facilitation in stress gradients. Current theory would predict both competitive effects and facilitative responses to be weakest in populations locally adapted to withstand high abiotic stress.

This thesis is based on six experiments, conducted both in greenhouses and in the field in Russia, Norway and Finland, with mountain birch (Betula pubescens subsp. czerepanovii) as the model species. The aims were to study potential local adaptations in multiple stress gradients (both natural and anthropogenic), changes in plant-plant interactions under conditions of varying stress (as predicted by SGH), potential mechanisms behind intraspecific facilitation, and factors confounding plant-plant facilitation, such as spatiotemporal, ontogenetic, and genetic differences.

I found rapid evolutionary adaptations (occurring within a time-span of 60 to 70 years) towards heavy-metal resistance around two copper-nickel smelters, a phenomenon that has resulted in a trade-off of decreased performance in pristine conditions. Heavy-metal-adapted individuals had lowered nickel uptake, indicating a possible mechanism behind the detected resistance. Seedlings adapted to heavy-metal toxicity were not co-resistant to others forms of abiotic stress, but showed co-resistance to biotic stress by being consumed to a lesser extent by insect herbivores. Conversely, populations from conditions of high natural stress (wind, drought etc.) showed no local adaptations, despite much longer evolutionary time scales.

Due to decreasing emissions, I was unable to test SGH in the pollution gradients. In natural stress gradients, however, plant performance was in accordance with SGH, with the strongest host-seedling facilitation found at the high-stress sites in two different stress gradients. Factors confounding this pattern included (1) plant size / ontogenetic status, with seedling-seedling interactions being competition dominated and host-seedling interactions potentially switching towards competition with seedling growth, and (2) spatial distance, with competition dominating at very short planting distances, and facilitation being strongest at a distance of circa ¼ benefactor height. I found no evidence for changes in facilitation with respect to the evolutionary histories of plant populations. Despite the support for SGH, it may be that the ‘humpback’ model is more relevant when the main stressor is resource-related, while what I studied were the effects of ‘non-resource’ stressors (i.e. heavy-metal pollution and wind).

The results have potential practical applications: the utilisation of locally adapted seedlings and plant facilitation may increase the success of future restoration efforts in industrial barrens as well as in other wind-exposed sites. The findings also have implications with regard to the effects of global change in subarctic environments: the documented potential by mountain birch for rapid evolutionary change, together with the general lack of evolutionary ‘dead ends’, due to not (over)specialising to current natural conditions, increase the chances of this crucial forest-forming tree persisting even under the anticipated climate change.