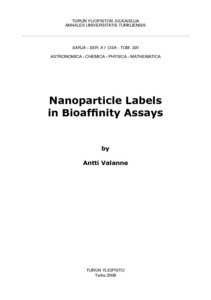 Nanoparticles offer adjustable and expandable reactive surface area compared to the more traditional solid phase forms utilized in bioaffinity assays due to the high surface to-volume ratio. The versatility of nanoparticles is further improved by the ability to incorporate various molecular complexes such as luminophores into the core. Nanoparticle labels composed of polystyrene, silica, inorganic crystals doped with high number of luminophores, preferably lanthanide(III) complexes, are employed in bioaffinity assays. Other label species such as semiconductor crystals (quantum dots) or colloidal gold clusters are also utilized. The surface derivatization of such particles with biomolecules is crucial for the applicability to bioaffinity assays. The effectiveness of a coating is reliant on the biomolecule and particle surface characteristics and the selected coupling technique. The most critical aspects of the particle labels in bioaffinity assays are their size-dependent features. For polystyrene, silica and inorganic phosphor particles, these include the kinetics, specific activity and colloidal stability. For quantum dots and gold colloids, the spectral properties are also dependent on particle size.

This study reports the utilization of europium(III)-chelate-embedded nanoparticle labels in the development of bioaffinity assays. The experimental covers both the heterogeneous and homogeneous assay formats elucidating the wide applicability of the nanoparticles. It was revealed that the employment of europium(III) nanoparticles in heterogeneous assays for viral antigens, adenovirus hexon and hepatitis B surface antigen (HBsAg), resulted in sensitivity improvement of 10-1000 fold compared to the reference methods. This improvement was attributed to the extreme specific activity and enhanced monovalent affinity of the nanoparticles conjugates. The applicability of europium(III)-chelate-doped nanoparticles to homogeneous assay formats were proved in two completely different experimental settings; assays based on immunological recognition or proteolytic activity. It was shown that in addition to small molecule acceptors, particulate acceptors may also be employed due to the high specific activity of the particles promoting proximity-induced reabsorptive energy transfer in addition to non-radiative energy transfer. The principle of proteolytic activity assay relied on a novel dual-step FRET concept, wherein the streptavidin-derivatized europium(III)-chelate-doped nanoparticles were used as donors for peptide substrates modified with biotin and terminal europium emission compliant primary acceptor and a secondary quencher acceptor. The recorded sensitized emission was proportional to the enzyme activity, and the assay response to various inhibitor doses was in agreement with those found in literature showing the feasibility of the technique. Experiments regarding the impact of donor particle size on the extent of direct donor fluorescence and reabsorptive excitation interference in a FRET-based application was conducted with differently sized europium(III)-chelate-doped nanoparticles. It was shown that the size effect was minimal