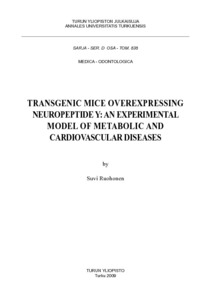 Neuropeptide Y (NPY) is an abundant neurotransmitter in the brain and sympathetic nervous system (SNS). Hypothalamic NPY is known to be a key player in food intake and energy expenditure. NPY’s role in cardiovascular regulation has also been shown. In humans, a Leucine 7 to Proline 7 single nucleotide polymorphism (p.L7P) in the signal peptide of the NPY gene has been associated with traits of metabolic syndrome. The p.L7P subjects also show increased stress-related release of NPY, which suggests that more NPY is produced and released from SNS. The main objective of this study was to create a novel mouse model with noradrenergic cell-targeted overexpression of NPY, and to characterize the metabolic and vascular phenotype of this model.

These results together with the clinical data indicate that NPY in noradrenergic cells plays an important role in the pathogenesis of metabolic syndrome and related diseases. Furthermore, new insights on the role of the extrahypothalamic NPY in the process have been obtained. The OE-NPYDBH model provides an important tool for further stress and metabolic syndrome-related studies.