A Diagnostic view of the Genetics of CASADIL

A Diagnostic view of the Genetics of CASADIL 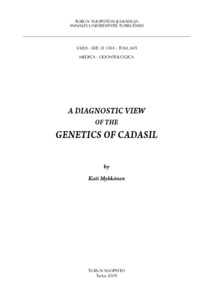 The aims of this study were assessment of the genetic background of Finnish and Swedish CADASIL patients, analysis of genetic and environmental factors that may influence the phenotype, and identification of the optimal diagnostic strategy. The majority of Finnish CADASIL patients carry the p.Arg133Cys mutation. Haplotype analysis of 18 families revealed a region of linkage disequilibrium around the NOTCH3 locus, which is evidence for a founder effect and a common ancestral mutation. Despite the same mutational background, the clinical course of CADASIL is highly variable between and even within families. The association of several genetic factors with the phenotypic variation was investigated in 120 CADASIL patients. Apolipoprotein E allele 4 was associated with earlier occurrence of strokes, especially in younger patients. Study of a pair of monozygotic twins with CADASIL revealed environmental factors which may influence the phenotype, i.e. smoking, statin medication and physical activity. Knowledge of these factors is useful, since life-style choices may influence the disease progression. The clinical CADASIL diagnosis can be confirmed by detection of either the NOTCH3 mutation or granular osmiophilic material by electron microscopy in skin biopsy, although the sensitivity estimates have been contradictory. Comparison of these two methods in a group of 131 diagnostic cases from Finland, Sweden and France demonstrated that both methods are highly sensitive and reliable.