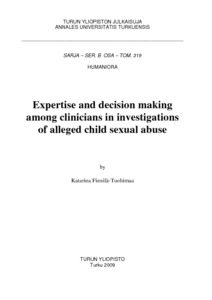 The purpose of the present thesis was to explore different aspects of decision making and expertise in investigations of child sexual abuse (CSA) and subsequently shed some light on the reasons for shortcomings in the investigation processes. Clinicians’ subjective attitudes as well as scientifically based knowledge concerning CSA, CSA investigation and interviewing were explored. Furthermore the clinicians’ own view on their expertise and what enhances this expertise was investigated. Also, the effects of scientific knowledge, experience and attitudes on the decision making in a case of CSA were explored. Finally, the effects of different kinds of feedback as well as experience on the ability to evaluate CSA in the light of children’s behavior and base rates were investigated. Both explorative and experimental methods were used.

The purpose of Study I was to investigate whether clinicians investigating child sexual abuse (CSA) rely more on scientific knowledge or on clinical experience when evaluating their own expertise. Another goal was to check what kind of beliefs the clinicians held. The connections between these different factors were investigated. A questionnaire covering items concerning demographic data, experience, knowledge about CSA, selfevaluated expertise and beliefs about CSA was given to social workers, child psychiatrists and psychologists working with children. The results showed that the clinicians relied more on their clinical experience than on scientific knowledge when evaluating their expertise as investigators of CSA. Furthermore, social workers possessed stronger attitudes in favor of children than the other groups, while child psychiatrists had more negative attitudes towards the criminal justice system. Male participants held less strong beliefs than female participants. The findings indicate that the education of CSA investigators should focus more on theoretical knowledge and decision making processes as well as the role of beliefs

In Study II school and family counseling psychologists completed a Child Sexual Abuse Attitude and Belief Scale. Four CSA related attitude and belief subscales were identified: 1. The Disclosure subscale reflecting favoring a disclosure at any cost, 2. The Pro-Child subscale reflecting unconditional belief in children's reports, 3. The Intuition subscale reflecting favoring an intuitive approach to CSA investigations, and 4. The Anti Criminal Justice System subscale reflecting negative attitudes towards the legal system. Beliefs that were erroneous according to empirical research were analyzed separately. The results suggest that some psychologists hold extreme attitudes and many erroneous beliefs related to CSA. Some misconceptions are common. Female participants tended to hold stronger attitudes than male participants. The more training in interviewing children the participants have, the more erroneous beliefs and stronger attitudes they hold. Experience did not affect attitudes and beliefs.

In Study III mental health professionals’ sensitivity to suggestive interviewing in CSA cases was explored. Furthermore, the effects of attitudes and beliefs related to CSA and experience with CSA investigations on the sensitivity to suggestive influences in the interview were investigated. Also, the effect of base rate estimates of CSA on decisions was examined. A questionnaire covering items concerning demographic data, different aspects of clinical experience, self-evaluated expertise, beliefs and knowledge about CSA and a set of ambiguous material based on real trial documents concerning an alleged CSA case was given to child mental health professionals. The experiment was based on a 2 x 2 x 2 x 2 (leading questions: yes vs no) x (stereotype induction: yes vs no) x (emotional tone: pressure to respond vs no pressure to respond) x (threats and rewards: yes vs no) between-subjects factorial design, in which the suggestiveness of the methods with which the responses of the child were obtained were varied. There was an additional condition in which the material did not contain any interview transcripts. The results showed that clinicians are sensitive only to the presence of leading questions but not to the presence of other suggestive techniques. Furthermore, the clinicians were not sensitive to the possibility that suggestive techniques could have been used when no interview transcripts had been included in the trial material. Experience had an effect on the sensitivity of the clinicians only regarding leading questions. Strong beliefs related to CSA lessened the sensitivity to leading questions. Those showing strong beliefs on the belief scales used in this study were even more prone to prosecute than other participants when other suggestive influences than leading questions were present.

Controversy exists regarding effects of experience and feedback on clinical decision making. In Study IV the impact of the number of handled cases and of feedback on the decisions in cases of alleged CSA was investigated. One-hundred vignettes describing cases of suspected CSA were given to students with no experience with investigating CSA. The vignettes were based on statistical data about symptoms and prevalence of CSA. According to the theoretical likelihood of CSA the children described were categorized as abused or not abused. The participants were asked to decide whether abuse had occurred. They were divided into 4 groups: one received feedback on whether their decision was right or wrong, one received information about cognitive processes involved in decision making, one received both, and one did not receive feedback at all. The results showed that participants who received feedback on their performance made more correct positive decisions and participants who got information about decision making processes made more correct negative decisions. Feedback and information combined decreased the number of correct positive decisions but increased the number of correct negative decisions. The number of read cases had in itself a positive effect on correct positive decision.