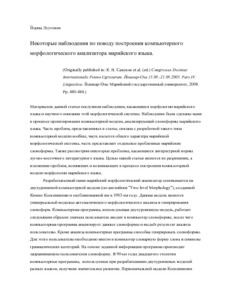 The article describes some concrete problems that were encountered when writing a two-level model of Mari morphology. Mari is an agglutinative Finno-Ugric language spoken in Russia by about 600 000 people. The work was begun in the 1980s on the basis of K. Koskenniemi’s Two-Level Morphology (1983), but in the latest stage R. Beesley’s and L. Karttunen’s Finite State Morphology (2003) was used.

Many of the problems described in the article concern the inexplicitness of the rules in Mari grammars and the lack of information about the exact distribution of some suffixes, e.g. enclitics. The Mari grammars usually give complete paradigms for a few unproblematic verb stems, whereas the difficult or unclear forms of certain verbs are only superficially discussed. Another example of phenomena that are poorly described in grammars is the way suffixes with an initial sibilant combine to stems ending in a sibilant. The help of informants and searches from electronic corpora were used to overcome such difficulties in the development of the two-level model of Mari.

The variation of the order of plural markers, case suffixes and possessive suffixes is a typical feature of Mari. The morphotactic rules constructed for Mari declensional forms tend to be recursive and their productivity must be limited by some technical device, such as filters. In the present model, certain plural markers were treated like nouns. The positional and functional versatility of the possessive suffixes can be regarded as the most challenging phenomenon in attempts to formalize the Mari morphology.

Cyrillic orthography, which was used in the model, also caused problems. For instance, a Cyrillic letter may represent a sequence of two sounds, the first being part of the word stem while the other belongs to a suffix. In some cases, letters for voiced consonants are also generalized to represent voiceless consonants. Such orthographical conventions distance a morphological model based on orthography from the actual (morpho)phonological processes in the language.