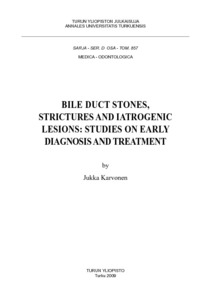 Aims: This study was carried out to investigate the role of common liver function tests, and the degree of common bile duct dilatation in the differential diagnosis of extrahepatic cholestasis, as well as the occurrence, diagnosis and treatment of iatrogenic bile duct injuries. In bile duct injuries, special attention was paid to gender and severity distribution and long-term results.

Patients and methods: All consecutive patients with diagnosed common bile duct stones or malignant strictures in ERCP between August 2000 and November 2003. Common liver function tests were measured in the morning before ERCP on all of these 212 patients, and their common bile duct diameter was measured from ERCP films. Between January 1995 and April 2002, 3736 laparoscopic cholecystectomies were performed and a total of 32 bile duct injuries were diagnosed. All pre-, per-, and postoperative data were collected retrospectively; and the patients were also interviewed by phone.

Results: Plasma bilirubin proved to be the best discriminator between CBD stones and malignant strictures (p≤0.001 compared to other liver function tests and degree of common bile duct dilatation). The same effect was seen in Receiver Operating Characteristics curves (AUC 0.867). With a plasma bilirubin cut-off value of 145 μmol/l, four out of five patients could be classified correctly. The degree of common bile duct dilatation proved to be worthless in differential diagnostics.

After laparoscopic cholecystectomy the total risk for bile duct injury was 0.86%, including cystic duct leaks. 86% of severe injuries and 88% of injuries requiring operative treatment were diagnosed in females. All the cystic duct leakages and 87% of the strictures were treated endoscopically. Good long-term results were seen in 84% of the whole study population.

Conclusions: Plasma bilirubin is the most effective liver function test in differential diagnosis between CBD stones and malignant strictures. The only value of common bile duct dilatation is its ability to verify the presence of extrahepatic cholestasis. Female gender was associated with higher number of iatrogenic bile duct injuries, and in particular, most of the major complications occur in females. Most of the cystic duct leaks and common bile duct strictures can be treated endoscopically. The long-term results in our institution are at an internationally acceptable level.