Novel Proteins Involved in Dynamics of The Photosynthetic Apparatus 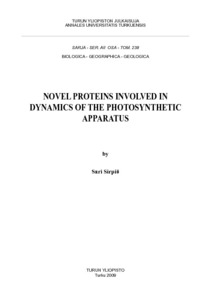 During the past few years, a considerable number of research articles have been published relating to the structure and function of the major photosynthetic protein complexes, photosystem (PS) I, PSII, cytochrome (Cyt) b6f, and adenosine triphosphate (ATP) synthase. Sequencing of the Arabidopsis thaliana (Arabidopsis) genome together with several high-quality proteomics studies has, however, revealed that the thylakoid membrane network of plant chloroplasts still contains a number of functionally unknown proteins. These proteins may have a role as auxiliary proteins guiding the assembly, maintenance, and turnover of the thylakoid protein complexes, or they may be as yet unknown subunits of the photosynthetic complexes. Novel subunits are most likely to be found in the NAD(P)H dehydrogenase (NDH) complex, the structure and function of which have remained obscure in the absence of detailed crystallographic data, thus making this thylakoid protein complex a particularly interesting target of investigation.

In this thesis, several novel thylakoid-associated proteins were identified by proteomics-based methods. The major goal of characterization of the stroma thylakoid associated polysome-nascent chain complexes was to determine the proteins that guide the dynamic life cycle of PSII. In addition, a large protein complex of ≥ 1,000 kDa, residing in the stroma thylakoid, was characterized in greater depth and it was found to be a supercomplex composed of the PSI and NDH complexes.

A set of newly identified proteins from Arabidopsis thylakoids was subjected to detailed characterization using the reverse genetics approach and extensive biochemical and biophysical analysis. The role of the novel proteins, either as auxiliary proteins or subunits of the photosynthetic protein complexes, was revealed. Two novel thylakoid lumen proteins, TLP18.3 and AtCYP38, function as auxiliary proteins assisting specific steps of the assembly/repair of PSII. The role of the 10-kDa thylakoid lumen protein PsbR is related to the optimization of oxygen evolution of PSII by assisting the assembly of the PsbP protein. Two integral thylakoid membrane proteins, NDH45 and NDH48, are novel subunits of the chloroplast NDH complex. Finally, the thylakoid lumen immunophilin AtCYP20-2 is suggested to interact with the NDH complex, instead of PSII as was hypothesized earlier.