Exposure to Tobacco Smoke and Markers of Subclinical Atherosclerosis in Children and Adolescents. The STRIP Study. 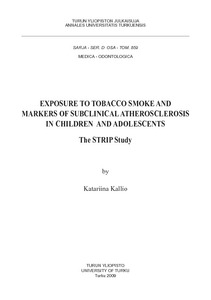 Aims: The aim of the present study was to evaluate exposure to tobacco smoke with a biomarker, serum cotinine concentration, and its associations with markers of subclinical atherosclerosis and lipid profile in school-aged children and adolescents.

Results: According to serum cotinine measurements, a notable number of the school aged children and adolescents were exposed to tobacco smoke, but the exposure levels were only moderate. Exposure to tobacco smoke was associated with decreased endothelial function as measured with flow-mediated dilation of the brachial artery, decreased elasticity of the aorta, and increased carotid and aortic intima-media thickness. Longitudinal exposure to tobacco smoke was also related with increased apolipoprotein B and triglyceride levels in 13-year-old adolescents, whose body mass index and nutrient intakes did not differ.

Conclusions: These findings suggest that exposure to tobacco smoke in childhood may play a significant role in the development of early atherosclerosis.